What if European integration were guided by a spatial vision? 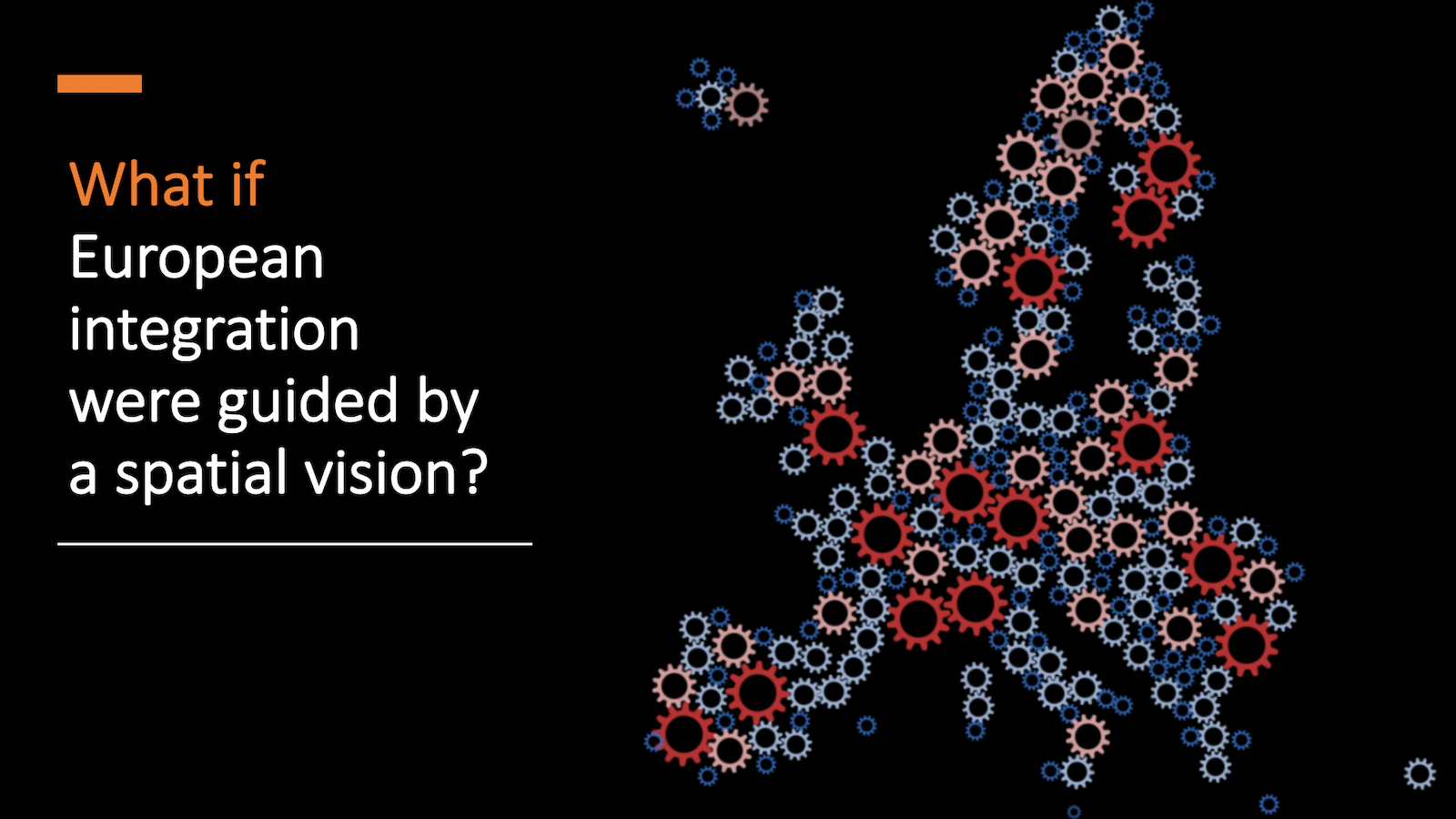 Territorial integration of the European continent is a long process shaping the fabric of economic, social and cultural functional relationships. With discussions on post COVID-19 pandemic recovery ongoing, we reflect on possible past lessons, asking what if European integration was guided by a spatial vision? Scenarios of different European pasts can help to illustrate the impact policy changes can have, e.g. in direction of a European integration aiming at a future for all places and people in Europe.

Revisiting declarations by Altiero Spinelli, Jean Monnet, Robert Schuman and George Marshall shows that ideas for something like an early European Spatial Development Perspective or Territorial Agenda in 1948 are not too farfetched. Some of those declarations were more ambitious than current debates about Europe. In that sense, Delors’ call for a broad vision of the European territory in 1989 could very well have been launched 40 years earlier, e.g. by Robert Schuman, Foreign Minister of France at the time.

Let’s imagine, how Europe could have evolved post World War II if developments were guided by an integrated spatial vision for Europe. Such a vision could then have underpinned the US financed European Recovery Programme, better known as ‘Marshall Plan’, focussing on ‘building back better’ and subsequently making Europe an integrated space. This certainly also would have meant letting go of the devastating war in a ‘collective amnesia’, and moving on for rebuilding post-war Europe.

Right after the war rebuilding infrastructure was important, as it was heavily damaged during the war. Guided by a European spatial vision, the focus could have been on rebuilding Europe’s transport networks as a seamless transnational space. An early version of what we today know as Trans-European Transport Networks. Instead of rebuilding and upgrading infrastructure with national visions of spoke networks converging on national capitals and a low priority for border regions, the focus could have been on building an integrated European transport network and strengthening inter-city connections across the continent. This would have led to a transport infrastructure which disregards national borders and the primacy of capital cities, and which forms the backbone of a frictionless transnational nodal space.

As the infrastructure networks emerged, progress could also have been made developing joint services for seamless transnational railway passages for people and goods. Over time this might have led to joint ticketing systems and mergers forming international railway operators. Following the successful development of integrated transnational transport infrastructure, telecommunication and energy networks would have followed a similar development path. As a result, when the International Telecommunication Union published its ‘Red Book’ on country codes in 1960, European countries would not have featured with individual country codes, but wit just a single code ‘4 for Europe’. Imagine, all the efforts of reducing mobile phone roaming charges in the EU, would have been avoided. By laying the foundation 50 years earlier, the introduction of mobile phone roaming charges between countries would have been equally absurd an idea as roaming charges between arrondissements in Paris.

All this would also have left its marks on the evolution of Europe’s post-war urban system. The development of integrated and seamless transport and communication systems across the European continent would have directly affected the growth and rebuilding of urban areas and the location of economic activities. There would be hardly any national core-periphery patterns as we know them today. Europe’s urban system would be characterised by a polycentric structure. Instead of centring on national capital cities – or national champions in Italy and Germany – a polycentric structure would have emerged, including a division of labour with distinct functions and specialisations for every urban area. Such a European urban system would explicitly recognise the diversity of European territory. It also would have turned pre-war buffer zones along the borders between nation states into central locations rather than national peripheries. They could have become the melting points of European integration.

The spatial vision would not only have affected infrastructure developments, but also people’s mindsets and integration in other policy fields. First and foremost, we would have seen the emergence of a fully integrated European labour market. This might have led to harmonised national social security and taxation systems, as well as many exchange and cooperation programmes for students and staff, building long-lasting cooperation networks. Supported by the ‘collective amnesia’, this would also have spurred a growing multi-national character of Europe’s society and media landscape. For those still remembering the French Minitel, imaging if that would have become an all-European champion and eventually set global standards for today’s internet.

This small experimental journey into a different past, a different recovery from the post-war Europe, depicts some benefits of a spatial vision and integrated spatial development. This is not a judgement of what people did back then. It is a call for daring to think differently about future recoveries. Re-thinking the recovery from the COVID-19 pandemic from a different angle, and considering the merits of a strong Territorial Agenda for Europe with clear commitment throughout the EU, to start with. The lesson of this journey is: It is possible to shape the future we desire when thinking forward and encouraging societal imagination. However, it requires clear political commitment and powerful implementation instruments – comparable to the ‘Schuman Declaration’ and the ‘Marshall Plan’.

In a similar way to the scenario, it is never too late to break development continuities and shape a Just and Green Europe to bring a bright future for all places and people in Europe. Therefore, we argue for a more outspoken spatial vision for an integrated Europe taking the ‘Territorial Agenda 2030’ forward and making it a guiding beacon for EU Recovery Policies post COVID-19 pandemic.