What are possible outlooks on land abandonment in Europe? When the agricultural use of a piece of land is given up and land use changes to forest or artificial land one talks about land abandonment. According to a recent study conducted for the European Parliament approx. 30% of agricultural areas in the EU might be abandoned in the near future. That are approx. 56 million ha.

Land abandonment means there is less land for the production food and fodder. Furthermore, it has harmful effects on the development of semi-natural habitats. It leads to irreversible ecological impacts, especially when agricultural land is turned into building land. It also has social consequences, not at least in more rural regions.

In the context of the afore mentioned study, a group led by ÖIR has developed three contrasting scenarios on how land abandonment might evolve in the decades to come. The three scenarios depict extreme – but possible – negative interpretations of selected external factors affecting land abandonment. The scenarios want to provoke further debate on desired future land use and necessary steps to be taken.

Climate change – playing out e.g. in form of flooding and drought – is one of the drivers of land abandonment, as it makes farming an unforeseeable and incalculable risk business, from which even venture capitalists shy away. In this scenario droughts and water competition in Southern Europe, a shift of vegetations zones and increasing natural hazards drive land abandonment all over Europe, and especially in the South, mountain areas and along the coast lines. The map shows the regions most negatively affected by land abandonment (in red) and regions that might benefit due to an increase in temperature (in green). 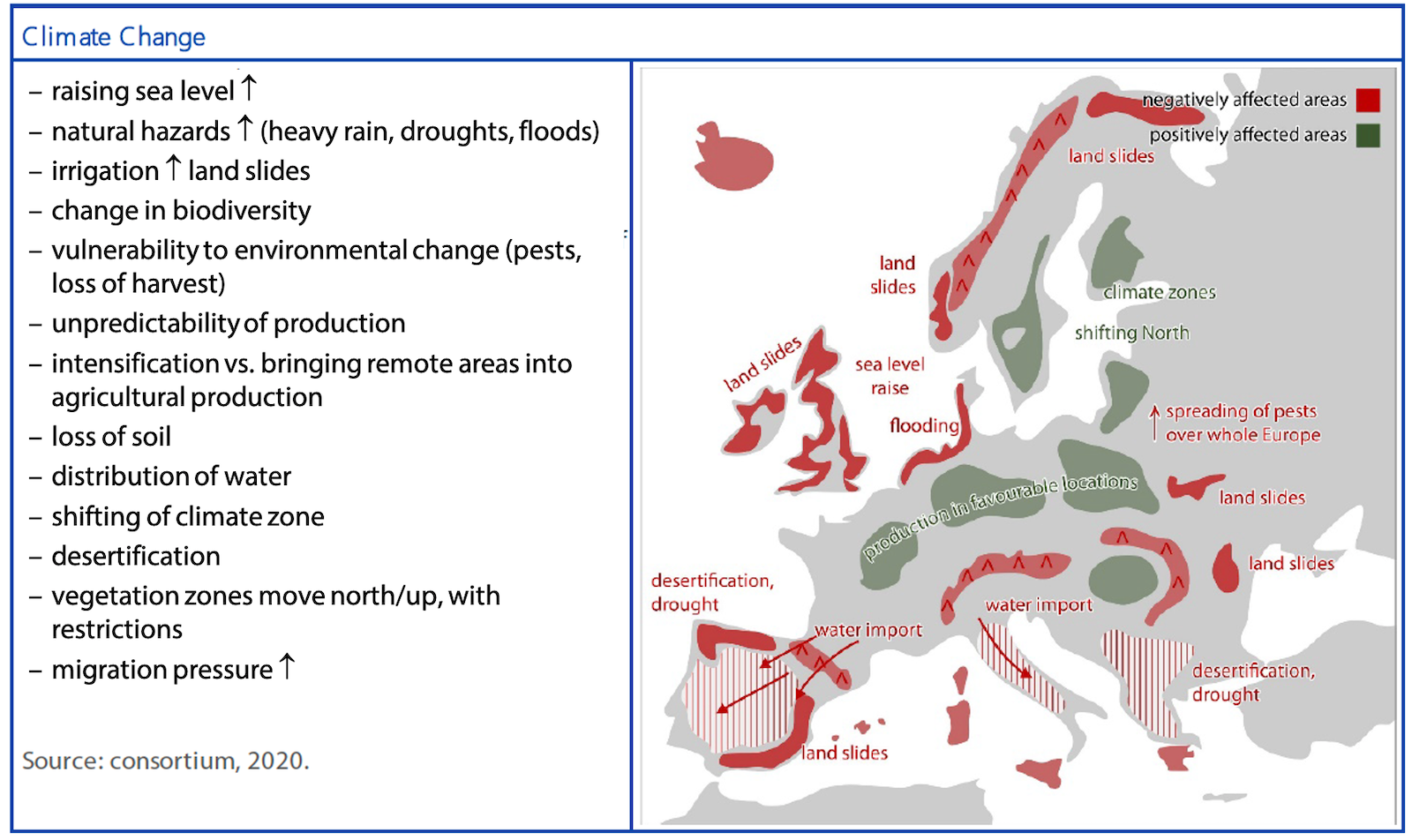 In this scenario, globalisation in agriculture, global demographic growth and further urbanisation in Europe lead to an increasing concentration on large farms that can harvest agglomeration benefits from intensified farming. This drives growing land use conflicts in favourable location, where intensified farming can enhance agricultural production, i.e. produce higher outputs per ha and/or per person working on a farm. At the same time, intensified farming spurs further land abandonment in remote areas and areas with less favourable locations and brings increasing difficulties for small-scale family farms. Farming as elements of self-reliance and preservation of local identities becomes unnoticeable. The map provides some insights on where an increasing globalisation of agriculture leads to increasing land use conflicts, intensification of land use and land abandonment in Europe. 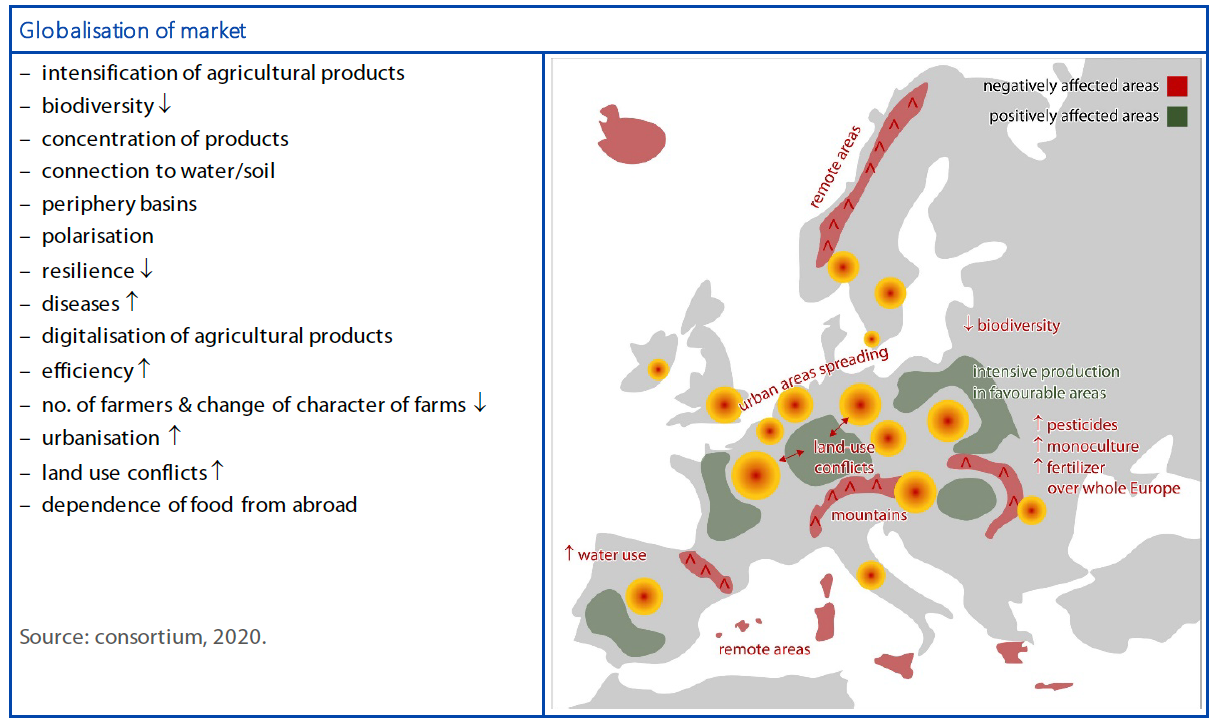 The COVID-19 pandemic hangs on until 2030 in this scenario and leads to a subsequent closure of Europe’s external borders. Economic decline and fading international trade forces European economies to develop various new strategies to cope with this isolation from the rest of the world. An important step in this is the stimulation of regional and organic production. In parallel, Europe experiences a demographic shift from urban centres to ‘smart villages’, which leads to a renaissance of rural area and the ‘rediscovery’ of the value of soil as resource. Ultimately this leads to increasing land use conflicts and innovations allowing for more efficient agricultural production. Given the increasing need of European self-sufficiency in food production, land abandonment is not an issue. In this scenario urban areas and Europe’s external border regions are at risk of depopulation trends. 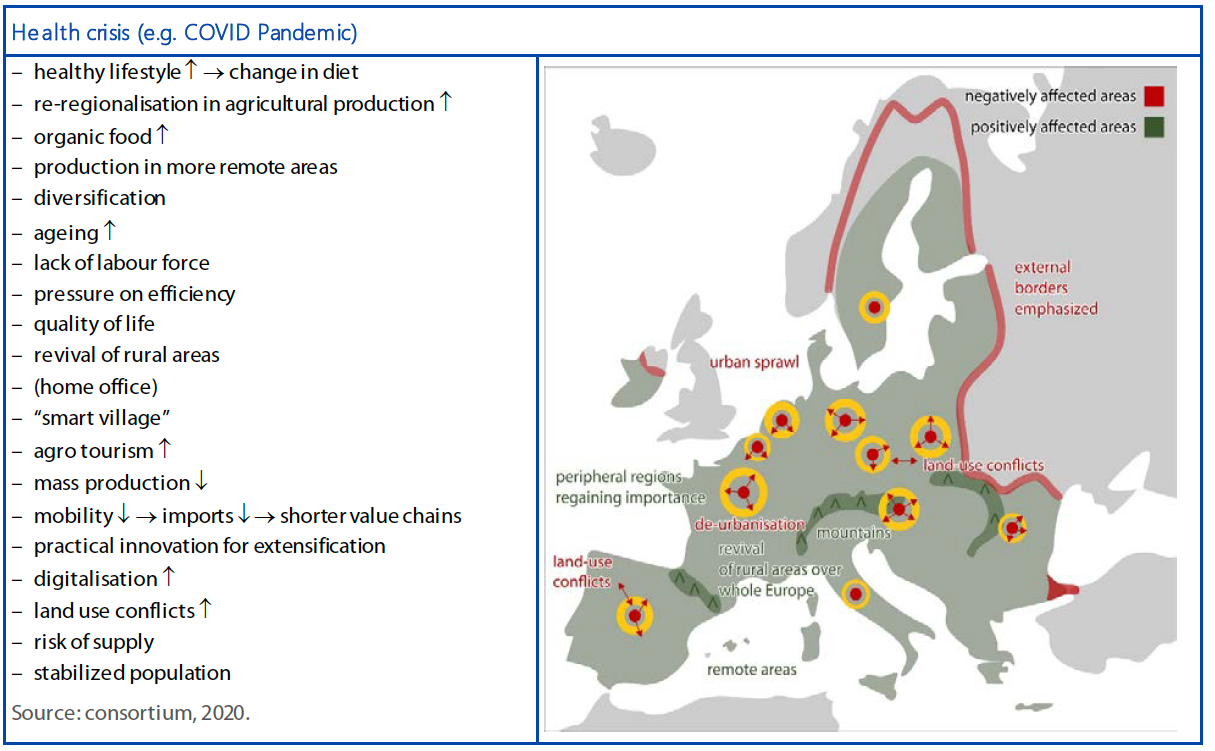 Following the three scenarios, Europe might need to get prepared for increasing land use conflicts in more favourable areas as well as the risk of additional land abandonment – with all its social, economic and ecological consequences – in less favourable areas. These less favourable areas comprise most likely mountain areas, areas with less fertile soil and areas increasingly affected by climate change e.g. in form of droughts or flooding.

Land use in Europe might change in the coming decades, more than envisaged in business as usual local and regional development plans and strategies. More on this can be read in the full report on the challenge of land abandonment after 2020 and options for mitigating measures.