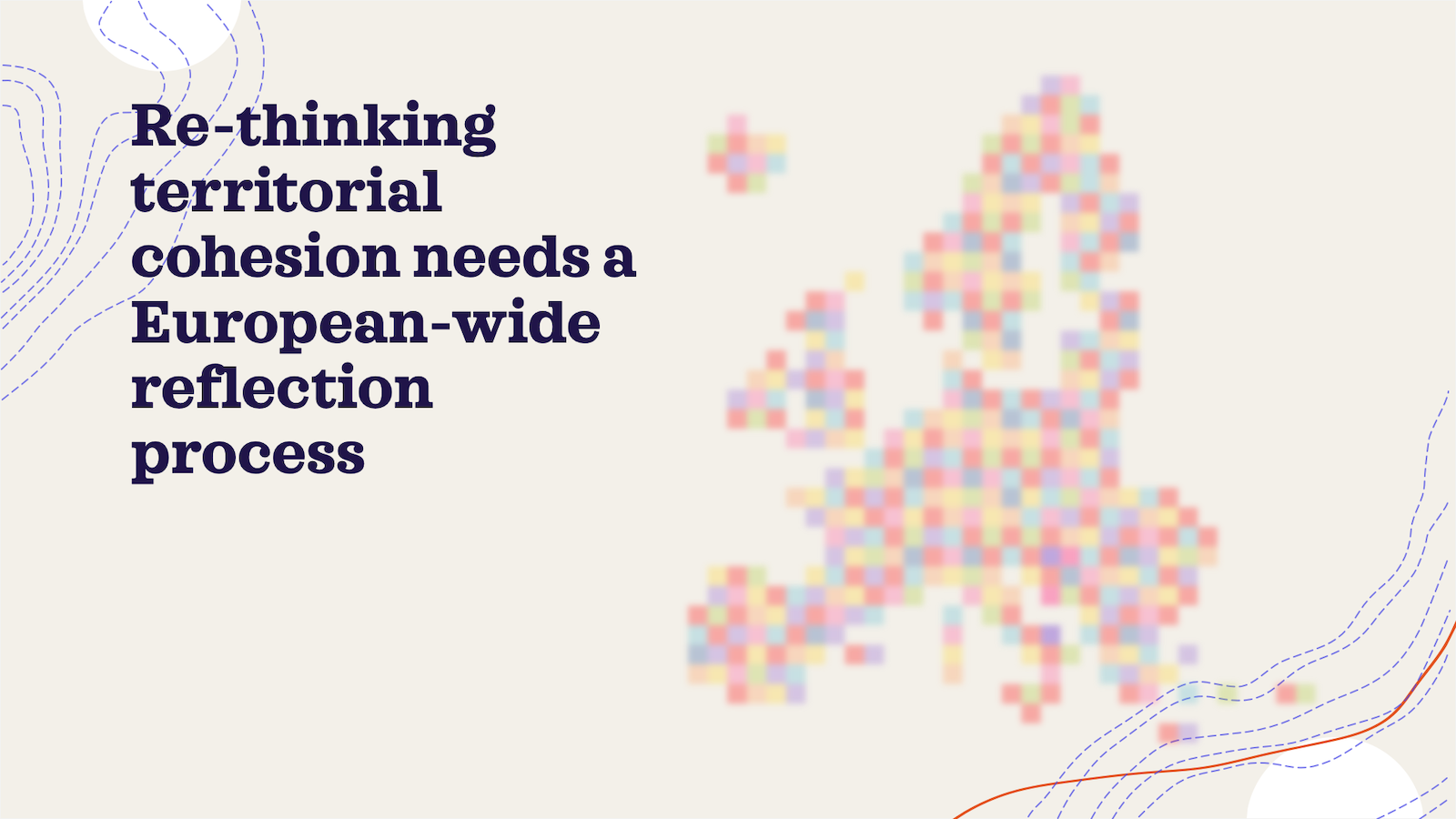 Cohesion, and here in particular territorial cohesion, is more than ever needed for Europe. Actual developments points in the wrong direction, territorial imbalances are increasing, and decisive political spheres and policy fields seem largely to neglect that territorial cohesion is an inherent aim of the Treaty for the EU.

Looking ahead, the political weight on territorial cohesion has to change. The challenge will be to convince influential policy makers that the EU will need and benefit from a makeover, re-think and strengthening of cohesion policy.

A stronger focus on territorial cohesion and a future for all places, is ambitious in many ways, but it should nevertheless be considered to carry-through a broad European reflection process centred on the well-being of people in different types of places.

This would probably bring new ideas to the table and at the same time support a consensus building that later would benefit implementation. It should ideally be started by the European Commission, integrate the Council, European Parliament, Committee of the Regions, etc. and seriously engage with the diversity of communities within the EU.

Cohesion and in particular territorial cohesion are more than ever needed for the Europe. Actual developments points in the wrong direction, both on the ground by trends of increasing territorial imbalances, and in the decisive political spheres, particularly at European and national levels, where territorial cohesion considerations are overshadowed by other policy fields and rather absent in the forward-looking policy discourse.

By advocating for a stronger role of territorial cohesion, the radical ideas presented in the previous blog post capture well the mindset that should guide the elaboration of a comprehensive proposal for a modernisation of cohesion policy. The mindset can be boiled down and highlighted in 11 key points:

However, more detailing of a possible implementation is needed, and the dialogue should carry the ideas further to an outline of a practical proposal suitable for policy makers to address. For this some issues are important to bear in mind and progress.

The political reality for territorial cohesion is not easy. The challenge will be to convince influential policy makers that the EU will need and benefit from a makeover, re-think and strengthening of territorial cohesion. This ambition is substantial in the current political landscape and to become reality, it will surely require hard promotion work and at the end a high-level EU decision, at least at the European Commission.

Lifting territorial cohesion higher on the political agenda in the EU and obtaining a positive decision to do more should not be under-estimated and will require a strategic, comprehensive approach. It will probably be necessary to outline a detailed proposal that explains the need, the approach, the expected results/added value, and, in particular, the operational setting including the envisaged support and involvement by other sectors and citizens. An outline of implementation provisions and funding mechanisms envisaged at EU level will be important, including not least ideas for the (mix of) indicators for the distribution of EU funds and criteria for obtaining territorial cohesion support. The latter, normally a key focus in the political discussions.

As territorial cohesion is backed by the Treaty of the European Union and a potential substantial funding, this will remain a key lever for territorial cohesion in the future. In the further detailing of and dialogue on new ideas for territorial cohesion and a future for all places it is important to be aware of the key elements in the current cohesion policy system, including priorities and implementation provisions and governance settings, etc. The existing system is likely to be the base line for discussing a renewed system. A proposal for a strengthening of territorial cohesion to become successful will therefore benefit from clarity of changes and present convincing answers on the aspects of key importance for deciding policy makers.

A re-thinking of the governance system is another particularly important challenge. It will be the task to conceive a new governance structure and procedural flow that involves citizens and places in defining the main purposes of territorial cohesion and negotiate desirable futures for people and places that (1) combine the diversities of people and places, and (2) bridges the interests and roles of different levels of government from the European level over member states to regions and local authorities. How this complex governance shall play out in practice is probably a crucial point for all policy makers and it should be given thorough attention in the further dialogue to elaborate the main lines of such a governance system.

As a radical re-thinking of cohesion policy and the territorial cohesion in the future is ambitious in many ways, it would benefit from a broad European reflection process. This might bring new ideas to the table and at the same time support a consensus building that later would benefit implementation. Such a Europe-wide reflection process should be started by the European Commission, ideally urged by the Council, the European Parliament, the Committee of the Regions, etc.

It could formally be an ‘Advisory Board on Territorial Cohesion’ towards 2050. A ‘Advisory Board on Territorial Cohesion’ should have an independent chair with a secretariat and a budget, and the composition of members should ideally include a selection of representatives from European Institutions, Member States, regions and local authorities as well as representatives of citizens from a diversity of places.

The basic mindset behind the work a ‘Advisory Board on Territorial Cohesion’ should be to promote the 11 key points mentioned above.

The terms of reference for a ‘Advisory Board on Territorial Cohesion’ should be to propose a long-term policy perspective for territorial cohesion providing a vision for a future for all places that reconciles different interests of citizens and utilises the diverse potentials of places within the EU. The perspective should include a global outlook.

The ‘Advisory Board on Territorial Cohesion’ should also define and agree a comprehensive governance framework that embraces and ensure both top-down and bottom-up roles and input. It should carefully define the exact roles and competences of each of the different administrative levels, of other sectors, as well as the involvement and power of citizens representing certain places when defining and deciding priorities for interventions, concrete local projects and their funding.

A final proposal of the ‘Advisory Board on Territorial Cohesion’ should also include a proposal for an administrative multi-level framework for proper support to territorial cohesion and a future for all places ensuring policy and financial support to a cascade of diverse interventions initiated at EU, national, regional and local levels, and in particular promote decentralised decided projects with direct citizen involvement.

The advice and proposals from a ‘Advisory Board on Territorial Cohesion’ should feed into the periodic policy process within the EU. In the wide deliberations around the EU the aim should be, with strong and convincing arguments, to give significantly strengthened priority for territorial cohesion and a future for all places in EU Cohesion Policy after 2027.

It goes without saying, that convincing policy makers that territorial cohesion and a future for all places should have more policy weight, will require genuine and strong backing at political level.

Hopefully, the dialogue process can generate fruitful ideas and support the necessary political power of arguments. My reflections so far are intended to stimulate this.