Shrinking areas are territories confronted with continuous loss of population which display symptoms of a structural crisis. Thus, shrinkage is a process of territorial decline which manifests at multiple social, economic, and environmental scales. The complex net of social and economic issues finds a common denominator around which all different facets of such processes converge: significant demographic decline. Therefore, shrinkage shall be intended as the territorial transposition of population drain and it concerns vast areas of the European territory, as it has been already shown in a previous article. Shrinkage is a consolidated phenomenon that has been reinforcing the last 50 years, reaching today more than a quarter of all European municipalities, and leaving almost no country excluded. And if we take a look to the future, will shrinkage be more or less relevant?

If we fast forward to 2050 it emerges that this shrinkage is expected to consolidate and expand to new territories. Projections suggest that population loss will continue affecting most areas of the EU, as it has done in the past, but it will also expand to other areas that did not know a single case of shrinking municipality until now. These areas are labelled blind spots of future shrinkage. They are NUTS 3 territories that are not currently being observed, studied, or treated as shrinking areas, but where evidence suggests that population loss is an underlying dynamic (mainly driven by ageing, birth ratio decline and migration among the main drivers of Eurostat projection methods). Their identification can be highly relevant in the policy debate as these are ‘asymptomatic’ cases of future shrinkage. The below map shows the extent of European shrinkage in 2050, including blind spots. 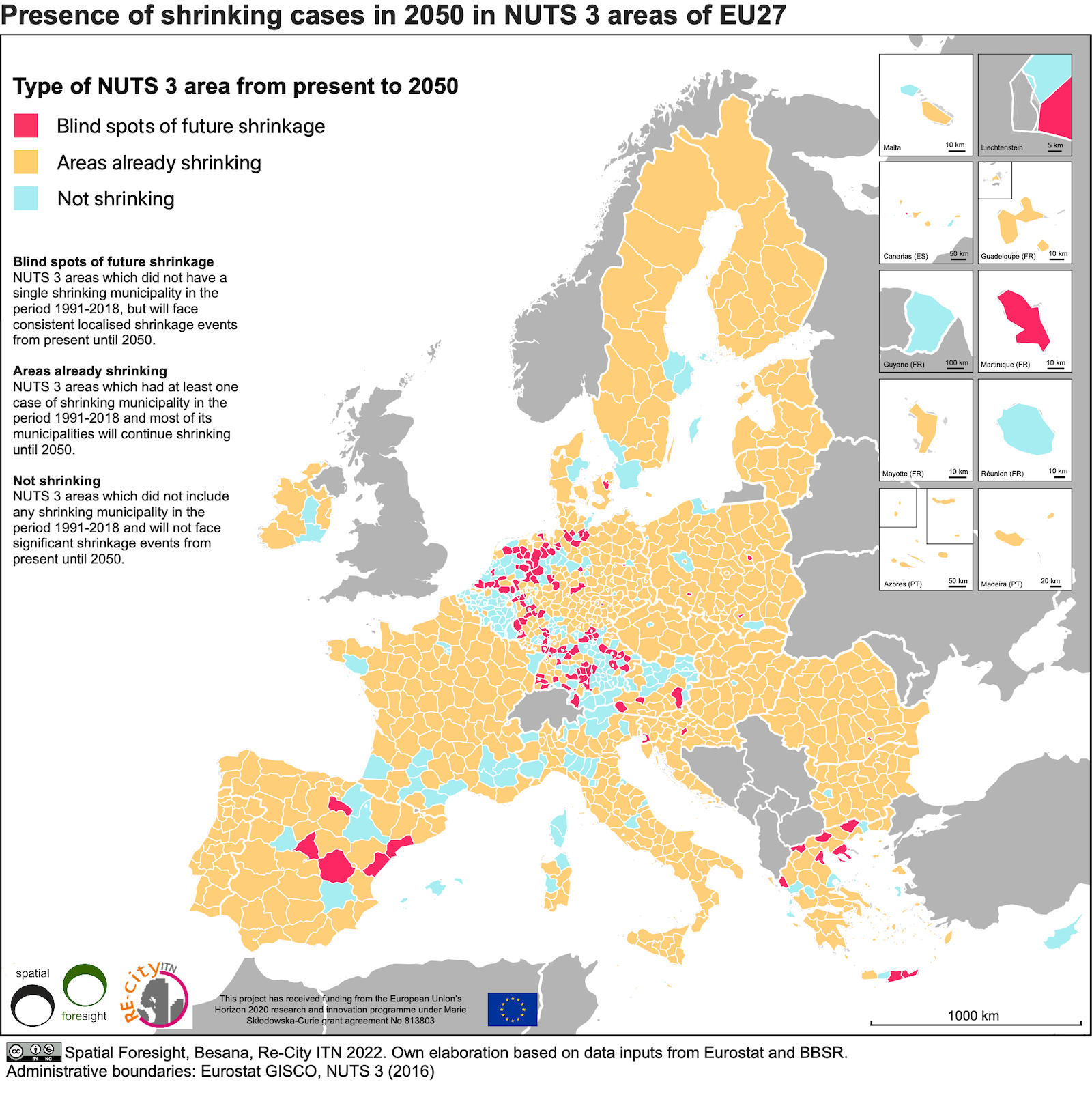 Overall, the map reveals that by 2050, the 77% of European NUTS 3 areas will be dealing with shrinkage. Blind spots of future shrinkage (red) are distinguished from areas already confronted with shrinkage (yellow), and the few areas that have been and will continue being spared from shrinkage in the future (blue). Territorial patterns suggest that blind spots of future shrinkage are mostly localised in Germany and the Netherlands, but also Greece, Spain and Austria. Blind spots stand for 11% of all NUTS 3 areas, and concern eleven different EU countries. Nevertheless, the map reveals that most European territories are already confronted with episodes of shrinkage today. Will currently shanking areas continue to shrink in the future?

What future for areas already shrinking?

Below map displays the results of municipal population projections for all European municipalities that are already shrinking today. It emerges that besides very few exceptions (mostly located in Northern Italy, Finland, France and Greece) where regrowth is happening until 2050, the vast majority of European territory is painted in orange, pink and purple, thus signalling shrinkage is expected to continue at increasing rates. When compared with past shrinking trajectories it emerges that demographic decline is becoming more intense and expanding territorially in the upcoming years. 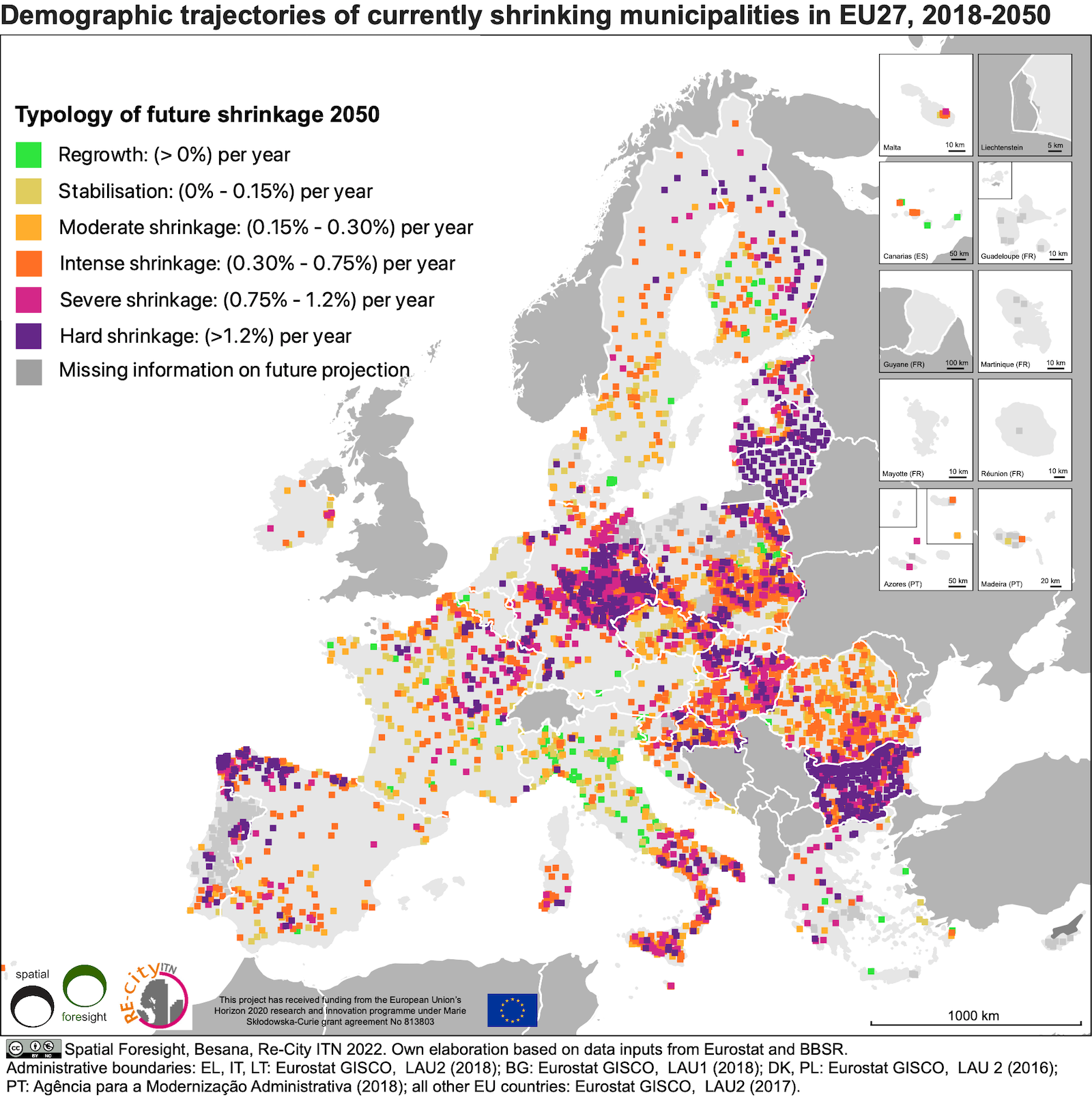 Shrinkage is growing: what to do about it?

Population decline is the common ground for wider multifaceted processes of territorial decline, with similar social and economic implications. The process of shrinkage has grown into a rooted challenge for many areas of the EU, and in the future it will expand further.

If the demographic projections and shrinkage trends would have been less negative for the coming years, it would appear be more reasonable (and cost-efficient) to just let shrinking areas go naturally and concentrate resources on more ‘rewarding’ territories. The likelihood that shrinkage will become an ever more prominent trend makes currently shrinking areas a working field for approaches to be tested, improved, and replicated across similar contexts. In addition, the ex-ante identification of blind spots of future shrinkage opens a window opportunity for these places to adopt a proactive (instead of reactive) approach towards shrinkage. Adopting greater awareness towards shrinkage and facilitating new approaches to the territorial development (or not) of shrinking areas also means getting ready for a trend that will continue growing. In a way, raising the debate about the territorial dimension of demographic decline today means learning and establishing the practice rather than just putting a band aid on the bleeding.

The acknowledgment of shrinkage by local and national authorities and its recognition as prominent trend in the future of European territorial development are crucial steps to find solutions beyond the idealised scenario of regrowth. In a European context of declining population overall, and underlying agglomeration and urbanisation effects, regrowth may be a realistic goal for very few cases, and it would happen at the detriment of other neighbouring (or not) areas. Alternative approaches and coping strategies such as ’smart shrinkage’ have already emerged, where governance quality, capacity and local visions are pivotal ingredients to improve the liveability and resilience of shrinking areas (see also). Frameworks to exchange best practices and facilitate cooperation among shrinking areas at European level would help local actors to envision future developments for their territory. This process should include an active role for citizens in the design of strategies and projects. At the same time, citizen engagement in co-defining the future of their territories would help tackling discontent, lack of democratic participation and may reconnect local institutions with their citizens. Thanks to its citizens shrinking areas may not be regrown, but they can certainly be revived!

More details on this work, will be presented in the PhD thesis of Flavio Besana later this year. He wrote this PhD thesis at Spatial Foresight in the context on the Marie Skłodowska-Curie Horizon 2020 project RE-City ITN (Grant agreement: 813803).