Regional sensitivities to the consequences of the war in Ukraine

The war in Ukraine will affect local and regional development beyond Ukraine. In the framework of a study for the European Committee of the Regions, we are currently analysing how the war might affect cohesion in the EU. In this blog post we share first reflections and invite for comments and discussions which may help to better understand the implications the war may have for local and regional development – being well aware that there are considerable uncertainty about how our new realities will look like in the years to come.

To start with, we certainly acknowledge that any consequences on local and regional development in EU member states are neglectable compared to the consequences in Ukraine. To underline this, we have opted for a single exposure indicator: Having the act of war and armed fights ongoing in one´s own territory or not. This means only Ukraine is directly exposed, whereas all EU member states are indirectly exposed to the war. 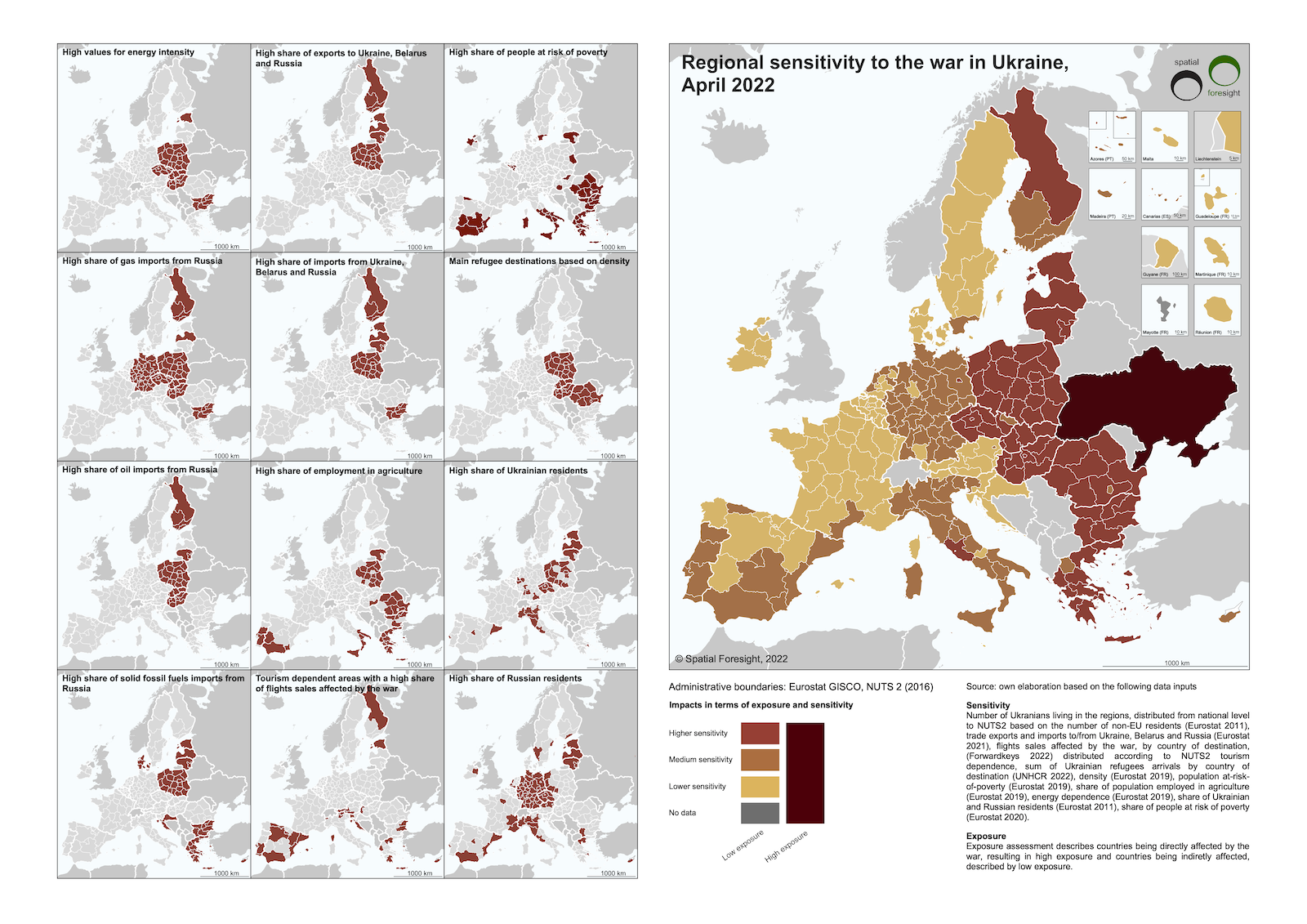 When it comes to the sensitivity of regions in the EU, the picture is rather varied and depends largely on the economic structure, socio-economic profile and the energy dependency. A first aggregated picture of various regional sensitivities to the consequences of the war in Ukraine shows a clear East-West divide. Running from Finland in the North to Greece in the South, almost all regions in the countries along the eastern border of the EU and in Czechia show high sensitivities for a number of sensitivity indicators analysed. While only a few metropolitan areas in the other countries do so, e.g. Rome and Berlin.

Regions with medium high sensitivities are mainly located along the Mediterranean, incl. Cyprus, most of Italy, large parts of Spain and Portugal, as well as in Germany.

This analysis builds on a set of indicators depicting the regions’ energy dependency, economic structure and socio-economic profile. For each of these we have selected a few sensitivity indicators to provide first insights:

Energy dependency. The war in Ukraine has sent energy prices to new heights, which affects in particular energy intensive industries. Furthermore, the war illustrates Europe’s dependency on energy imports from Russia, especially gas. This has been translated into four sensitivity indicators:

Economic structure. The war in Russia affects a wide range of economic operators. In particular those trading with partners in Ukraine, Russia and Belarus are affected as these value chains are largely disrupted, be it because of the war or because of sanctions. Furthermore, the impacts of the war affect a range of economic sectors incl. e.g. agriculture and tourism. This has been translated into four sensitivity indicators:

Socio-economic profile. The impacts of the war have a strong human or social component in the EU. This is particular the case for the refugees coming to the EU and subsequently also affecting the cities and regions where they go to. It also affects people living in the EU e.g. via increasing inflation rates, which makes life more cumbersome for less well-off people and households. The social dimension has been translated into four sensitivity indicators:

These sensitivities have been translated into indicators for which EU-wide data is available and brought together in a combined negative sensitivity index shown in the map.

Going beyond above geographical patterns, the war in the Ukraine, once again, presented the EU with a common enemy which strengthens solidarity between member states. This question remains whether this solidary in times of crises brings members states and people in the EU closer together or just temporarily glosses over conflicts and divides in the EU. In the latter case, these divides – e.g. on the rule of law and the path to carbon neutrality – risk to make a comeback and be much stronger when the immediate crisis is over. In this way, the impact of COVID-19 and the war in Ukraine might become much stronger and fundamental to the EU.

Similarly to the COVID-19 pandemic, the war in Ukraine reminds us of the importance of resilience and the capacity to act in face of unexpected events and wildcards. These capacities are closely linked to the question of resilience and the ability to deal with uncertainty. In general terms, resilience describes the ability of a system to ‘bounce-back’ or return to its pre-shock position. However, in a foresight and future-oriented context, resilience concerns the ability to reorganise rather than to ‘bounce-back’, otherwise one risks standing empty handed. This links to the debate about the ‘imaginary crisis’ and need to move from ‘what is’ to ‘what if’ to create the future we want dwelled on in an earlier blog post.

The final results of this first analysis will be presented in a report to the European Committee of the Regions later on summer 2022.