‘Shrinking places’ or ‘lonely places’ – as some call them – are a growing challenge for European municipalities, regions and even countries. Eurostat’s long-term population projections point at a population increase of the EU-27 from 447 million inhabitants in 2019 which peaks around 449 million in 2026. Thereafter population numbers are expected to decline. They will gradually decrease to 441 million in 2050 and to 416 million in 2100 (see Eurostat). This long-term population decline will play out differently across territories.

Map: Municipalities with a population decline above 1% per year between 2011 and 2017 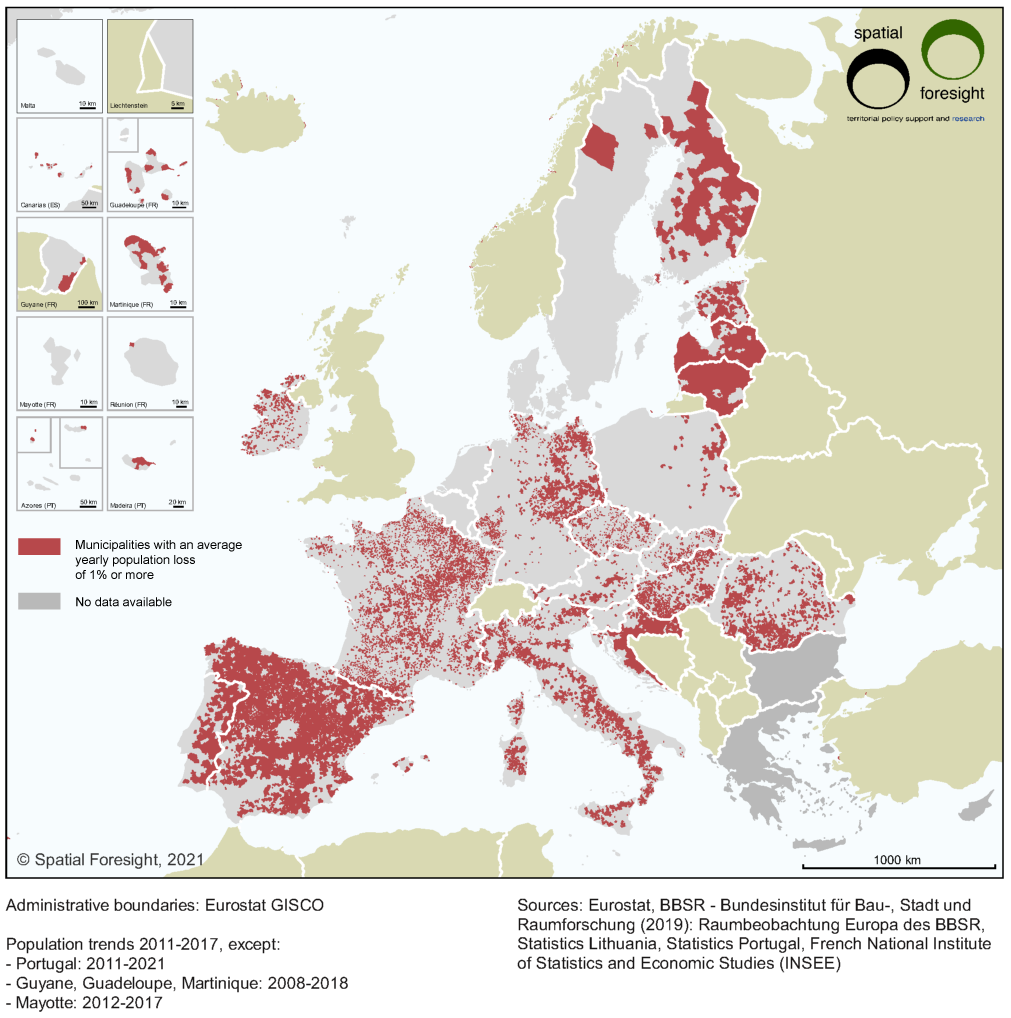 Figure: Share of population living in municipalities with a population decline above 1% per year between 2011 and 2017, by Member State 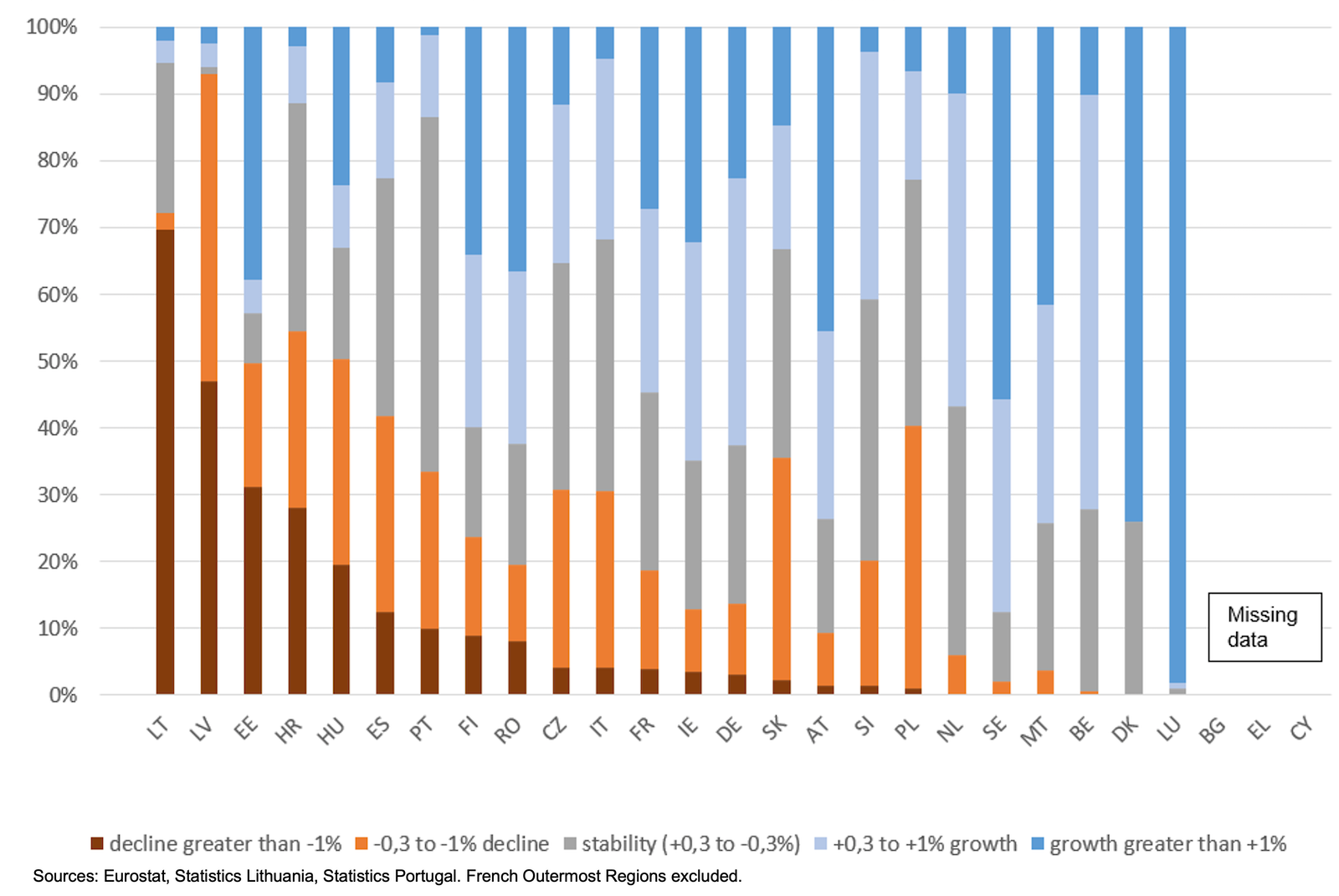 Many shrinking municipalities – which are often to be found in rural areas – face vicious circles where population decline leads to declining service provision in the areas, which affects an area’s attractiveness and thus contribute to further aging and demographic decline.

How to adapt and become resilient when shrinking?

Population shrinkage has been discussed by more forward-thinking players for some decades already, often focused on strategies to reverse population decline. Only in recent years, the discussion is spreading to a wider set of players and envisages a wider set of possible scenarios  for places experiencing population decline. Policies can for example seek to reduce the social and environmental impact of local population decline and try to create preconditions for the stabilisation of demographic trends when this is possible.

Indeed, it is not always purposeful to try to revert local population losses. Population decline can reflect an adaptation to changing framework conditions, e.g. technology that reduces the labour-intensity of certain sectors. This has typically been the case in agriculture, extractive activities and manufacturing. However, local population decline is often a social trauma, especially when it is rapid. Public policies to accompany population decline are therefore called for also when reverting losses is not considered a realistic option.

Going beyond economic concerns and looking at the social viability of communities affected by population decline the notion of ‘loneliness’ is used to describe and analyse shrinking places. In an ongoing piece of research, the European Joint Research Centre looks at the shift from lonely places to places of opportunities. This puts the focus on places as nodes in networks with a wide range of different links and flows passing through providing quality in amenity provisions and human interactions.

In short, shrinking places do not necessarily need to be considered as places in a vicious downward circle, but can be seen through different lenses which offer pathways to positive future outlooks.

How to support shrinking places

Shrinking places often need support to take active ownership of their future and a debate on how develop positive future prospects. This includes funding for ensuring the provision of services of general interest, adjusting infrastructure to changing demand and increasing attractiveness.

However, financial support is only one component of a policy that effectively supports ‘smart shrinking’ and/or a stabilisation or reversal of negative demographic trends. Other aspects are equally important:

Exchanges of experience and good practice can provide valuable inputs to such policies.

The European Commission DG REGIO has paid increasing attention to the issue of local population decline in recent years, in dialogue with Member States such as Spain and Italy. Regulations for the European Regional Development Fund in the 2021-2027 programming period specify that “Member States should consider developing specific voluntary action plans at local level" for areas with rapid population decline in recital 45. The Long-Term Vision for Rural Areas that was adopted in June 2021 envisages “actions supporting the analysis of the drivers of demographic decline in the rural areas that suffer from it in Europe, and inclusion and integration measures for people with a migrant background and other minorities”. The partnership agreements and operational programmes that are currently being negotiated will provide indications on the extent to which these declarations of intent lead to concrete measures.

by Erik Gløersen and Kai Böhme

[1] This ratio does not take into account figures for Bulgaria, Cyprus and Greece, as no data are available.