Border obstacles to the integration of the Western Balkans

Border obstacles are one of the stumbling blocks of European integration. Border obstacles are specific closure effects deriving from the political, geographical and natural, economic or/and socio-cultural dimension of a border between two neighbouring countries. They may concern the entire length or a smaller segment of a border. In most cases border obstacles have negative impacts on local and regional development in the border regions. In some cases the negative effects can even be of national or European-wide nature.

A recent study to DG REGIO on cross-border obstacles between enlargement countries and EU member states reveals some interesting information on Western Balkan integration. The study analysed 222 obstacles for cross-border cooperation between enlargement countries and EU member states in South-East Europe, most of which matter for the Western Balkans (see map). In the following, we concentrate on the border obstacles in the Western Balkans. There, most of them relate to a specific bilateral border or parts thereof. 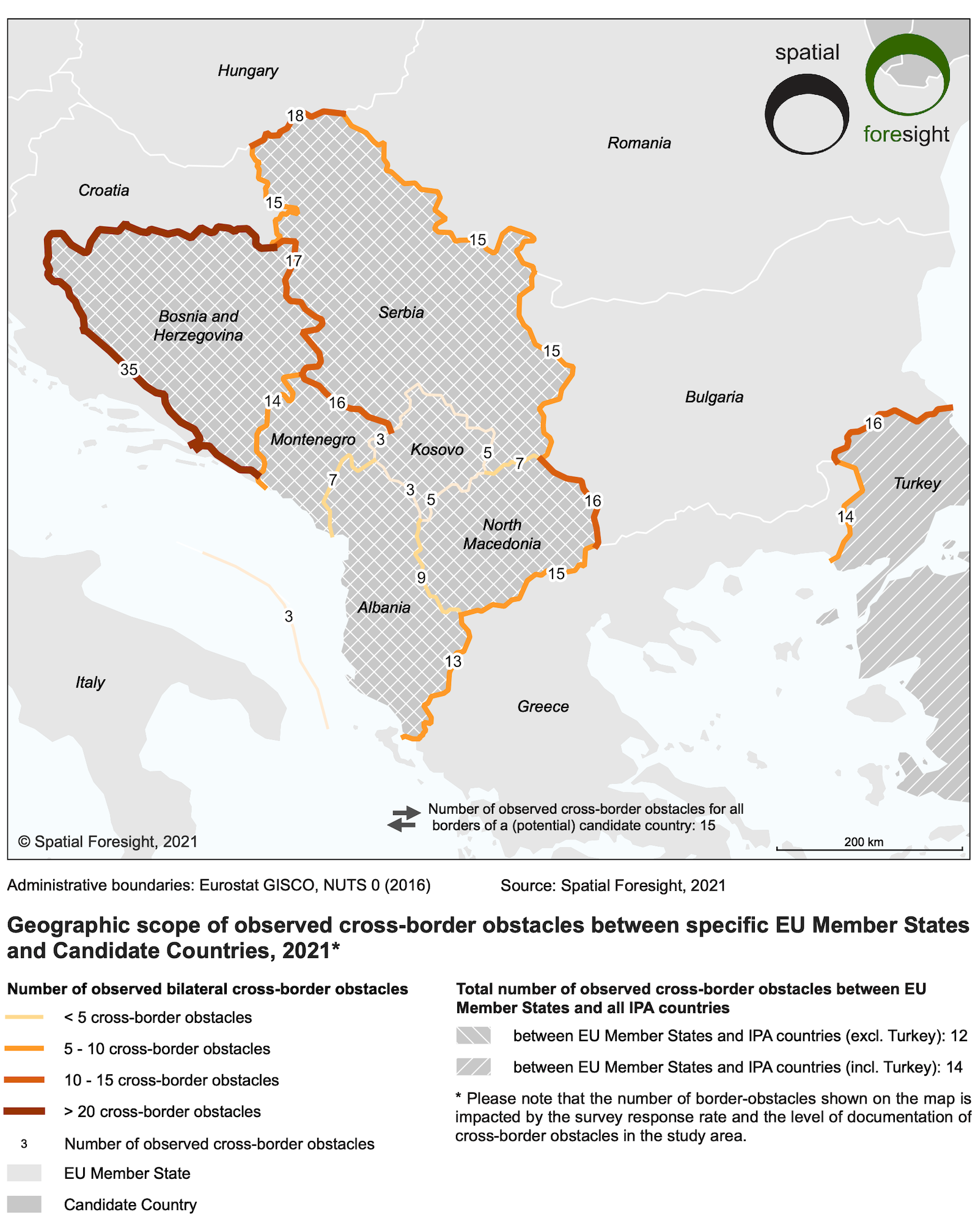 On the Western Balkans, most border obstacles are rooted in the political dimension of the respective border. This means, different legal or administrative barriers hamper cross-border cooperation. The reasons for this can be manyfold. They range from the interpretation of borderlines and their official recognition, via legal obstacles resulting from national and EU law to specific administrative and governance conditions. Such obstacles can be related to weakly developed or different governance systems and administrative structures as well as different national laws and regulations.

About one third of the obstacles are related to the geographical or natural dimension of the respective border. Most of these are due to a lack of cross-border (transport) infrastructure for crossing rivers or mountains, etc. Many are at border crossings between enlargement countries and EU member states. However, also the lack of coordination of natural resources can be a reason for border obstacles. The inadequate protection or management of natural resources in a border area can have negative effects on the cross-border ecological connectivity.

Obstacles rooted in the economic and socio-cultural dimensions are actually rather rare in comparison to the above types. Only few border obstacles relate to language barriers, including the recognition – or rather lack– of linguistic minorities living on the other side of a border has been identified as cross-border obstacle. There are also few economic and socio-cultural obstacles at the Croatia-Bosnia and Herzegovina border, while the Greece-Albania border has the most cases for socio-cultural obstacles.

In our political realities every border obstacle is there for a good reason. This might be simply to protect the interest of people at one side of the border. Nevertheless, in most cases border obstacles have severe negative impacts on the development potential of the border area.

Around half of the obstacles identified in the study lead to both monetary and non-monetary costs for the affected organisations, groups or individuals with border-crossing activities.

Among others the obstacles generate direct effects mostly in terms of loss of time, additional costs for services and procedures and inconvenient cross-border travel, while those affecting labour market and employment mostly entail restrictions in accessing services and individual income losses. However, there are also cases where the border obstacles have direct negative impacts on health care, due to restrictions in accessing services, loss of time and additional costs for services and procedures. Other types of negative effects concern higher transaction costs for business activities, or inefficient environmental protection and management of natural resources.

In addition to these immediate negative effects, border obstacles can also have knock-on effects or re-enforcement effects, which further increase the negative effect of the obstacles. In consequence, these entail wider impacts as they can hamper socio-economic development in a cross-border region, weaken socio-cultural ties, harm the environment or lower the quality of life for citizens in the region.

Addressing border obstacles and trying to find solutions can improve the development potential of a border area and strengthen European integration. The study shows that a range of different policies are concerned when trying to reduce border obstacles. In the Western Balkans, most obstacles relate to transport & sustainable mobility policies, followed by natural resources & environmental protection and civil protection & public security policies.

However, there are some subtle differences between the borders and in particular between different types of borders (see figure): 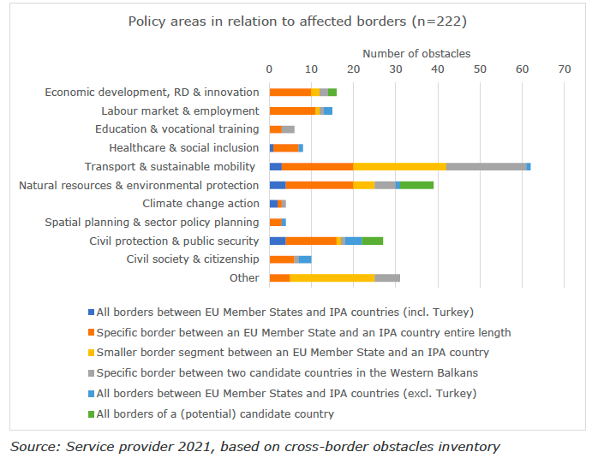 Solving border obstacles does not necessarily require major national or European policy actions. For about 90% of obstacles local or regional governance approaches may be sufficient to solve or at least mitigate the obstacle and induce further steps. This can range from stronger cross-border cooperation of policies, via more regular cross-border exchanges, the pragmatic bridging of shared problems, to the elaboration of joint cross-border development plans or the establishment of cross-border public services. This underlines the importance of local and regional governance for the development and EU integration of the Western Balkan countries, a point that has been made earlier by the Western Balkan Network on Territorial Governance.

Nevertheless, national legislative actions and agreements are important to overcome legal and administrative obstacles but often need to be complemented with above soft tools and approaches.

Overall, reducing border obstacles and support local and regional governance approaches to mitigate obstacles is an important step to EU integration and a precondition for more cohesion in the Western Balkans, as well as elsewhere in Europe.

The full study conducted by Spatial Foresight in cooperation with EureConsult and t33 will be available shortly on the website of DG REGIO.

by Sabine Zillmer and Kai Böhme