The future of European cohesion and the just and green transition of Europe is not just up to public policies and large businesses. Social enterprises and the social economy might hold the potential to shape some of this. However, for this they might need a gentle push.

Social enterprises and the social economy

Increasingly businesses are not just about generating profits. To be attractive to employees and customers they also committee to wider societal purposes. This can be in the fields of environment helping to deliver on the UN sustainable development goals, in the fields of social inclusions supporting diversity e.g. concerning gender balances, social and cultural backgrounds, sexual orientation, or in other societally relevant fields.

While many enterprises add a layer of social or environmental responsibilities to their original economic purpose, social enterprises go one step further. They combine societal goals with entrepreneurial spirit to achieve wider social, environmental or community objectives. This means, their main objective is to have a social impact rather than make a profit for their owners or shareholders.

However, a European social economy is still in the making, as there are significant differences between national, regional and local contexts in Europe. There is a need to build capacity at local and regional level and tackle the specific needs of cross-border social economy organisations in rural and peripheral areas.

To support social enterprises and an emerging social economy in Europe, the Social Business Initiative (SBI) was launched in 2011. It introduced a short-term action plan to support the development of social enterprises, key stakeholders in the social economy and social innovation, and prompted a debate on possible avenues to be further explored. In December 2021 this was followed up by an EU Action Plan for the Social Economy.

Over the past 10 years the EU Social Business Initiative has contributed to a favourable social economy ecosystem in the EU and beyond. The initiative has raised awareness, and visibility opened doors at national and regional and helped to get access to funding. Overall, it is seen as a game changer. Some of the key achievements and impacts from a recent impact study are summarised in the infographic: 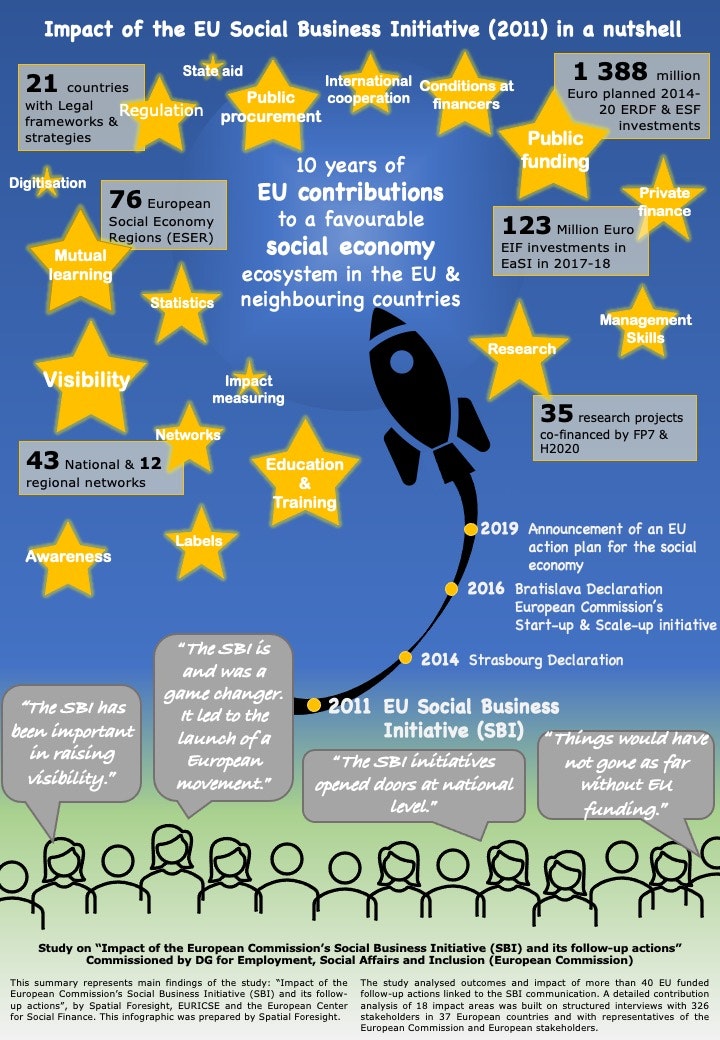 While a lot happened to support social enterprises, the ecosystem of the social economy has become more complex. More players, ideas and initiatives broadened the spectrum in Europe.

As for the future

With the launch of the EU Action Plan for the Social Economy, the social economy will be further pushed in the years to come. This will strengthen its potential to contribute to local and regional development, address social and societal needs, create and offering jobs in the community, promote social innovation and develop a rational for Europe’s economic and social transition. If everything works out, social economy enterprises will account for more than 10% of all enterprise in the near future.

For this to happen, it is important to build capacity at local and regional level. Place-based solutions are needed to strengthen the social economy in our highly diverse national, regional and local contexts. The European Social Economy Regions (ESER) initiative can be an effective instrument to do so, but social economy initiatives can also be supported by many other EU instruments and funds. Local partnerships between regional and local authorities and the social economy need to be strengthened. Cross-border networking will create further opportunities to exchange ideas and solutions.

Strengthening the social enterprises, and in doing so, the social economy in Europe is not a means in itself. It is an important instrument to necessary transitions to a green and just Europe and building on place-based approaches will also contribute to social and territorial cohesion.

More insights are available in the impact study of the European Commission’s Social Business Initiative.

by Kai Böhme and Silke Haarich