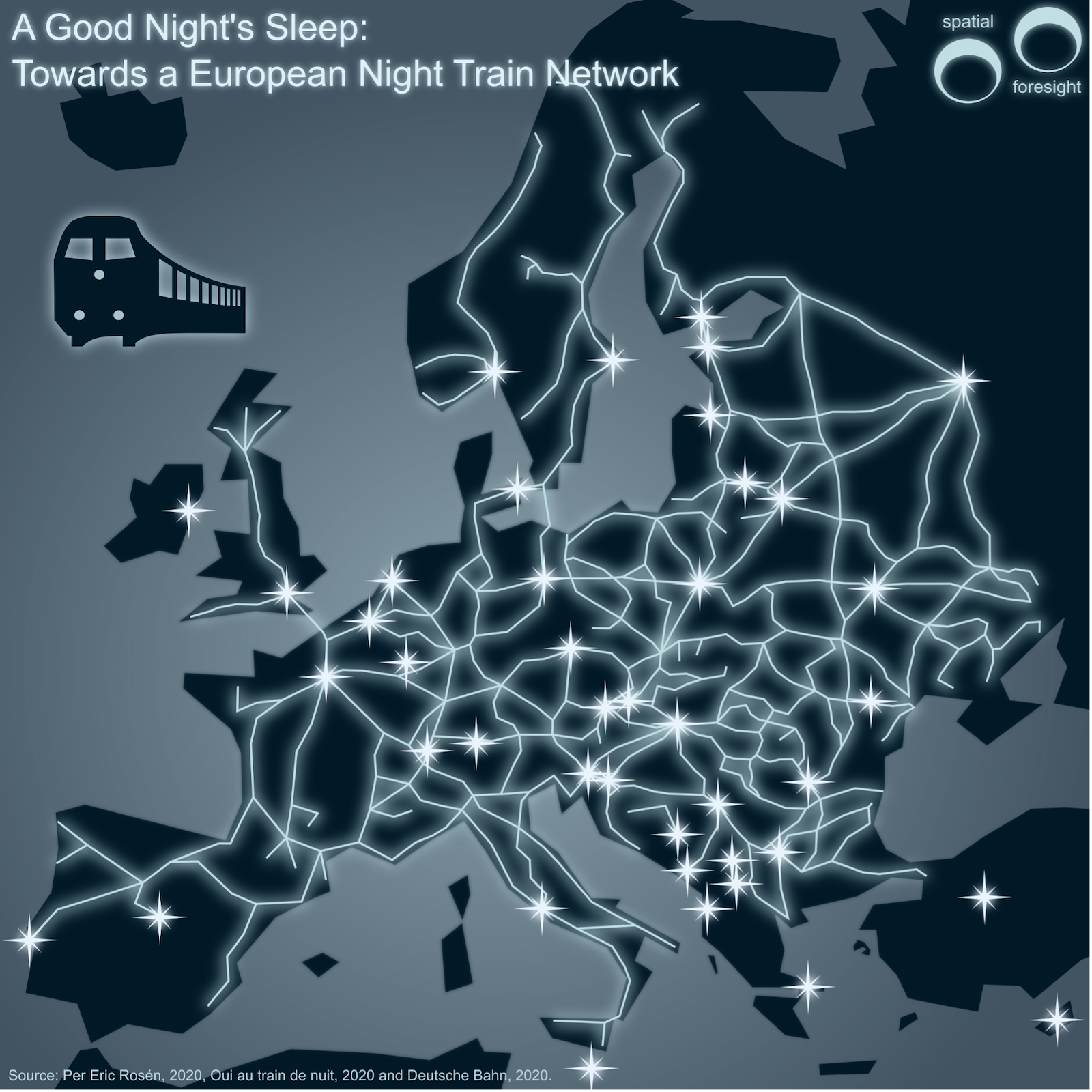 Night trains are coming back in fashion. Over the last years, increasing numbers of plans and visions for night train connections have been published by various train operators and debaters in Europe. We have produced a map that shows what a European night train network could look like, if existing, planned and proposed night connections would come together. It is based on information summarised by Per Eric Rosén from www.rosnix.net and www.rail.cc, www.ouiautraindenuit.wordpress.com and www.bahn.de. Such a network holds a lot of potential, and it shows that we can rethink the way we are traveling.

Vision for European train networks. The post-COVID normal could lead the way to a climate neutral Europe. It could even turn the ‘flygskam’ (being ashamed of flying) grown out of the ‘Fridays for Future’ movement into something positive. How about encouraging EU citizens to become ‘rail explorers’? In the name of efficiency, moving from A to B has increasingly been perceived as wasted time which needs to be cut down. This has made travelling quality poorer, as the transition and diversity of landscapes and geographies has been condensed, and, with it, the possibilities to encounter new people and ideas. Could the new normal become to make journeys from A to B part of our travel, holidays, business trips? This would make our travels more explorative and environmentally friendly. Night trains can be an important component of this approach. They make it possible to cover long distances and comfortably crisscross Europe.

Why not travel by night train? It is possible to create a dense network of night train connections that could become viable alternatives to short and medium haul flights. Just have a look at our map. Night trains could complement highspeed train networks in this respect. Discussions about substituting short haul flights by train connections are ongoing in various European countries. However, the understanding of short haul flights varies. In some discussions the focus is on the time needed by alternative modes of transport, e.g. in France, it concerns flights which could be substituted by 2.5 hours train rides. In other cases, the focus is simply on distance, e.g. any flights up to 800 km air distance could be substituted by rail. A combined strategy to develop highspeed and night train alternatives to flights could usefully build on a consistent European approach to ‘avoidable air transport’.

Invest for real. The idea is therefore to create rail connections that would be attractive alternatives to air transport. For such a vision to become true, Europe would need to make enormous investments in the future of rail travel. The EU’s Next Generation programme and especially the Recovery and Resilience Facility could be a starting point in this regard. Such an investment initiative would include parallel investments in highspeed and night train networks as well as in regional networks to create viable continental rail connections for all European regions, and not only the primary nodes. Necessary investments concern both network infrastructure as well as the rolling material. To be attractive, night trains need to offer 21st century couchettes, sleeping cars, sanitary installations and mini compartments with an adapted selection of standards. Some appealing for young travellers on long weekend trips to lovers and parties, some appealing to families or holiday travels and some appealing to business travellers needing to arrive rested and crisp for tough business negotiations. Investments are also needed to provide required services before, during and after a train journey. Such services range from integrated ticketing and online access on the train to information about local public transport for the ‘last mile’.

Think European. Over the last years, various rail companies have rediscovered the potential of night trains. In 2020, there was even something like a plan for night train connections jointly published by Austria, French, German and Swiss railway companies. Still, connections are mainly thought and planned in national terms with some links to some neighbouring countries. To become compelling to customers for holiday and business trips even beyond the borders of their home countries, European night trains need more than piecemeal links with neighbouring countries. European 'rail explorers’ need a consistent system of connections, making it possible to travel from Lisbon to Sofia or from Rovaniemi to Naples in adapted transport legs. It should be possible to plan these travels smoothly, and to combine overnight train segments with highspeed or slower segments and day visits in-between. For this to happen the European rail networks need to be thought as one network, and investments must be made where most needed, incl. investments in coordinated planning and booking platforms. How about a Trans-European Transport Network policy (TEN-T) for night rail?

Share your thoughts on this at Future of Europe Debate