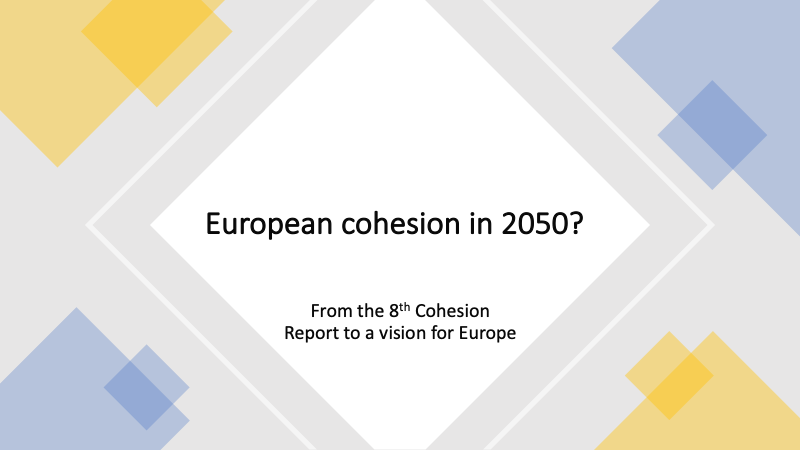 In February the European Commission published the 8th Cohesion Report under the heading of ‘Cohesion in Europe towards 2050’. As usual for Cohesion Reports, the report provides a comprehensive overview on the state of play in regional development and key cohesion challenges in Europe.

This covers a wide range of topics, including

These are just a few features addressed in the Cohesion Report. Each of them reveals a wealth of relevant information and findings on decreasing or increasing disparities, development trends and future potential and challenges. The report offers a good complement to Eurostat’s annual yearbooks and goes into much more depths in many areas.

The Cohesion Report goes beyond a detailed analysis of cohesion challenges today. The texts on green and digital transition and demographic change provide some glimpse on how Europe could look like by 2050. Building on the analysis the report also points at tools which need to be developed to achieve cohesion by 2050. These include among others

Is that all that is needed to achieve cohesion by 2050?

Despite the wealth of information presented in the report, what Europe should look like in 2050 remains rather implicit. The cohesion report lacks in putting all these elements together and does not offer a vision of how Europe should look like in 2050. Imagining a desired future – in light of the transitions, challenges and opportunities of the EU shall be the next step. Visions are a powerful tool for more informed and place-based policies in the future. The analysis and policy teasers of the report can be taken further to develop a territorial vision for Europe. This certainly would need to be done in a participatory approach – e.g. in a joint effort by the European Commission, European Committee of the Regions, the Joint Research Centre and ESPON, transnational cooperation frameworks with experience in vision development, and even citizens in a wider consultation process all across EU regions.

Such an approach would also need to become much more explicit about the underlying understanding of cohesion. What do we actually mean by cohesion and how do we know whether we have achieved it? The Cohesion Report addresses a wide range of development fields and policies which are relevant for cohesion. However, in most parts it seems to consider these only as enablers or obstacles for cohesion based on an understanding of convergence in terms of GDP, jobs and growth. Today this is no longer enough.

Already the discussions on cohesion go much further than that. See e.g. our earlier blog post on the Cohesion Spirit Compass. Among others, the Committee of the Regions argues to approach cohesion as an underlying value of public policy making – not just of Cohesion Policy. It also stresses the need to consider cohesion beyond its economic, social and territorial dimensions. Following the Cohesion Report’s rationale on the need for a the digital and green transition, one may also imagine digital and ecological cohesion. Furthermore, considering all approaches to bring the EU closer to the citizens and to address issues of the geography of discontent, also interpersonal cohesion might be worthwhile a debate.

The 8th Cohesion Report is a great possibility to start a discussion on how people understand cohesion and what their visions for a Europe in 2050 are.

More detailed reflections on other aspects of the 8th Cohesion Report will follow in due time.