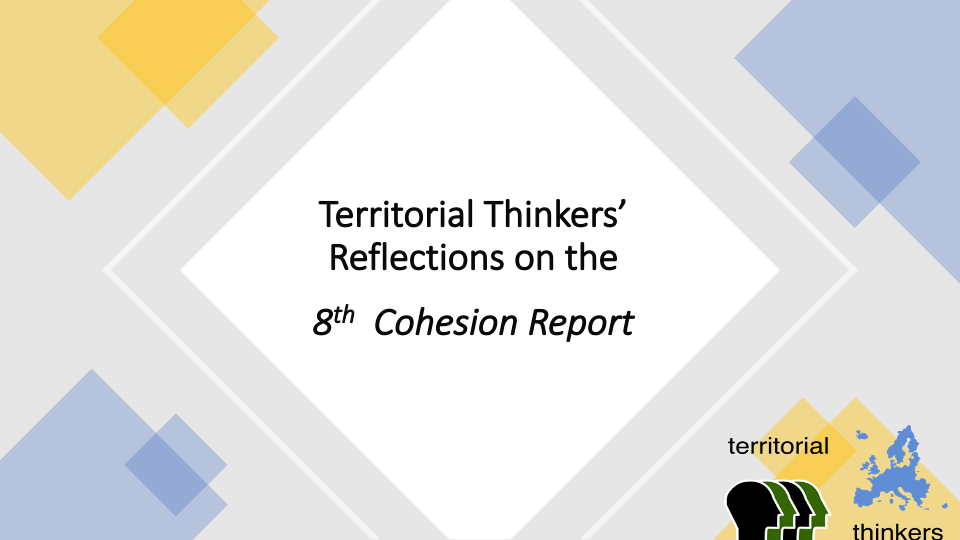 The 8th Cohesion Report is an important and welcome 'springboard' for developing cohesion policy further and debating new policy ideas. With a horizon of 30 years, this is a main target of the report.

A development strengthening territorial or place-based policy content within the EU Cohesion Policy, and a more inclusive implementation (i.e. ensuring an effective regional/local say), would provide for a more targeted and efficient policy implementation and counter the current critics of cohesion policy being more about managing EU funds than creating desired, targeted, coordinated and coherent results on the ground.

To support this aim for European cohesion policy there is a need for prioritising and strengthening territorial cohesion in the further European policy process. To underline the need to develop cohesion policy in this direction 6 key suggestions are made in this paper:

Positively, the impression is that the Commission is taking the territorial dimension more into account than before and includes some policy considerations from the Territorial Agenda for the EU.

Compared to earlier Cohesion Reports, this 8th report addresses cities, rural territories, less developed and transfer regions more than before. But references to (potential) territorial policy instruments and initiatives addressing functional areas, territorial impact of sector policies, place-based and horizontal policies, territorial instruments at local level, territorial cooperation, better governance of functional border areas, etc., are rather meagre and fragmented and should be better joined up. This calls for a significant improvement.

The general feeling is that the report has been conceived being aware that things need to be said in a different way but without the ambition to break out and embark on new and innovative policy avenues. There are only a few ‘out of the box’ innovative ideas in the report.

The objective should be to substantially enhance territorial cohesion in policy development by embarking on a new, innovative cohesion policy conception that in a comprehensive way addresses and translates the territorial variety within the EU into policy action.

Comprehensive analysis and underlying causes to be a priority

The 8th Cohesion Report provides a lot of interesting information about the state and development of European regions, and it delivers for many single indicators regional maps and averages for regional types, such as mean value for developed regions versus less developed regions.

The innovative elements that the report does include, for instance information about the quality of governance in different EU countries, are an attempt to take a position on the question why and where there is a discontent with the EU.

Behind the report is a rich material for single indicators, and the according data certainly contain lots of material interesting for universities and research institutes for further analysis. This statistical information will hopefully be made easily available for further external research and analysis.

However, there is a need to enrich the reasoning behind the included policy proposals. More comprehensive analysis should be ensured that, beside regions, also addresses the diversity within the entire EU territory, within urban, rural and other territories. In this context, the current maps are mainly descriptive and represent single indicators rather than supporting comprehensive multidimensional analysis.

To benefit the ongoing cohesion policy development, analysis and reflections on the underlying social and political reasons for the described developments should be further deepened. By couching indicators in cohesion terms, such as developed versus less developed regions, results are seemingly connected to the economic development status of regions, even where evidence suggests that societal reasons and individual behaviour are more relevant than economic conditions.

A deeper and ever more precise understanding of underlying causes and mechanisms and their territorial impact would enable more sound conclusions to be drawn for further policy development promoting territorial cohesion.

The 8th Cohesion Report is rather limited on detail on the diversity and dynamics of places, regions and territories within the EU.

More evidence should be used to make sure that the cohesion policy intentions of dealing convincingly with the diversity of problems and potentialities of specific places are fulfilled, in particular in the less developed regions and regions in transition which are considered particular targets by the EC.

In this context it is remarkable that the use of evidence inputs from the ESPON research programme on territorial development in the EU is strikingly absent. There is, except one reference to one indicator from one ESPON project, no mention of ESPON and its research results.

It is a surprise – and a missed opportunity - that very central research activities of the EU and its member states on territorial development and territorial cohesion in Europe is not contributing more as evidence source. This means in reality that a major territorial evidence source is overlooked.

This situation should definitely be reversed in future cohesion policy development, and the comparable and detailed knowledge on different territories built up over more than 20 years of ESPON should be used to enrich territorial analysis, priorities and actions favouring territorial cohesion.

An integration of territorial concerns and aims in policy development should have high ambition for future EU Cohesion Policy. This is true for activities within DG Regio itself and it is true for policy sectors dealt with by other Commission services.

Some progress in that direction is visible as the 8th Cohesion Report integrates a few elements from territorially defined policy processes within DG Regio.

Current elements from the Territorial Agenda should be further enriched and more policy considerations with a clear urban dimension added. This could include policy considerations linked to urban networks, to larger cities and the huge number of medium-sized and smaller cities and towns. Their variety of territorial contexts would obviously bring about groupings of urban areas with different cohesion needs. Moreover, it would be obvious to expand upon and link to the Urban Agenda.

In terms of rural territories, less developed regions and transfer regions, it is odd that the report does not mention the work on a Rural Vision at EU scale. Once ready, it would be obvious to inspire and translate its visionary elements and actions into cohesion policy development. This would also make cohesion policy more territorial and place based.

Cohesion must be sector cross-cutting and multi-governmental to become efficient. At the highest level of multi-governance in Europe, the European Commission has more responsibility to expand and develop this essential point than the other three national and sub-national administrative levels.

The majority of sector policies have a territorial impact and should be obliged to support territorial cohesion efforts, such as transport and digital networks, climate change initiatives and green environmental networks to mention but a few.

More policy coordination and integration efforts should be a milestone in Brussels in order to support territorial cohesion within EU Cohesion Policy. A cross directorates-general coordination facility and mandatory cohesion obligations in relevant EU policies could provide solutions and progress.

Likewise, territorial cohesion concerns should be firmly ensured in the governance arrangements around cohesion policy as the involvement and cooperation with regional and local authorities and actors represents an important lever.

A global long-term reference framework for the EU territory

The main orientations of the 8th Cohesion Report describing disparities and differences between European regions is important given the context and the current conception of EU cohesion policy.

But as said, it would benefit profoundly from more territorially sensitive, detailed and differentiated political aspirations and long-term perspectives and overall aims for the European territory.

More explicitly formulated, future-oriented policy ambitions, differentiated place-based aims and targets for different (types of) regions, places and territories would offer a more convincing valuation of the situation and opportunities for progress of different regions, types of territories and places in Europe.

Ideally, as said by the Territorial Thinkers many times, the EU would benefit from a long-term territorial reference framework for policy development and investments. This would give direction to cohesion and a balanced development of the EU Territory.

Such a framework could take the form of a vision or a strategy and set targets at EU level for the long-term overall territorial structures and balance, addressing territorial realities such as urban networks, (different) infrastructures and ecological networks, as well as specific types of regions and types of urban and rural places that national, regional and local cohesion implementation could prioritise and benefit from on the ground.

Hitherto, the EU has not had the political appetite to formulate overall territorial aspirations and perspectives for Europe due to an inherent complexity and the wish of member states to decide for themselves.

However, lately, the elaboration of a territorial vision for rural areas within the EU is in progress. Experiences from this positive new policy development should encourage and inspire the building of an EU territorial reference framework.

The EU urgently needs a territorial reference framework or vision for achieving more territorial cohesion between the different parts of the EU territory. Only measured against overall, long-term ambitions and targets a cohesion report can fully assess the successes and further needs of EU cohesion policy.

Indeed, an EU territorial reference framework will focus on the entire territory of the EU. However, it should also consider territorial relations, in particular to the EU’s Eastern and Southern neighbours. Although the current sombre situation in face of the war in Ukraine, the envisaged 30 years horizon gives hope that a long-term territorial reference framework for a more cohesive EU can contribute positively to a peaceful and cooperative larger European neighbourhood.

This text has also been published as Territorial Thinkers' Briefing 2022:09.