A rightful place for territorial cohesion in the European Commission 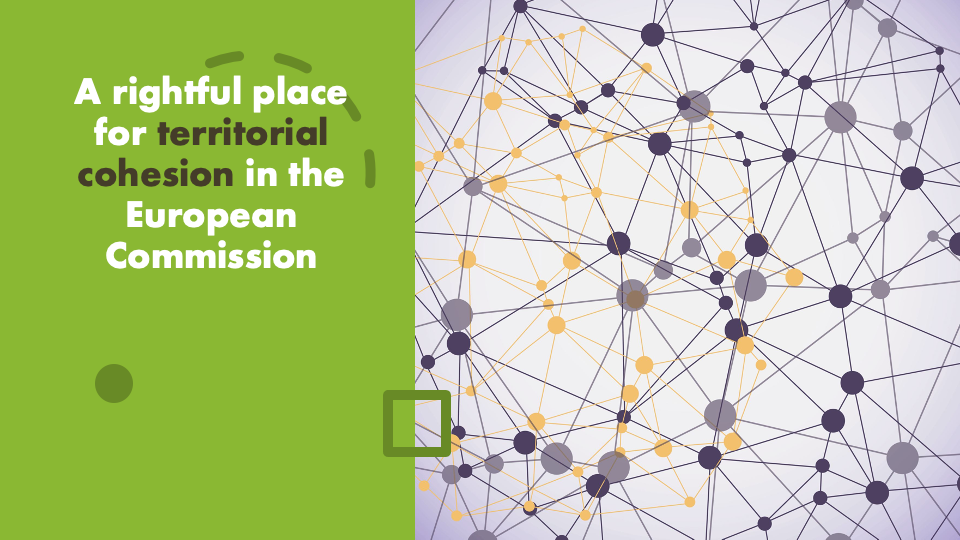 At all but the local level, it has always been quite difficult to  find a logical place for ‘spatial planning’ – or preferably ‘spatial or  territorial development’ – in any administration. The higher the  governance level, the more difficult it is to organise territorial  development administratively into a coherent and well-coordinated  policy.

Taking national administrations, these are usually divided into  ‘vertical’ – or rather sectoral – policy areas, with a few notable  ‘horizontal’ – or ‚cross-sectoral’ – departments, in particular Finance,  Justice, Internal Affairs or General Affairs, that have an (often  important) involvement in the work of the sectoral departments. ‘Spatial  development’ in most administrations is a sectoral policy department,  often linked with another policy area such as Housing, Economy or  Environment, whereas it is, essentially, a ‘horizontal’ policy area.  After all, spatial development influences and is influenced by the  policy work of most departments, directly or indirectly. As one amongst  other sectoral departments, often equipped with only moderate financial  and formal resources, spatial development has often been dependent on  the willingness of other departments to collaborate and has had to  'muddle through’ in political processes to get its policies effectively  implemented.

Now there’s a fourth level of governance. European policy development  during the past 25 or so years has shown that there is an irrefutable  and increasingly important territorial dimension to policy-making at the  European level, whether environment, regional economics, climate,  agriculture & rural development or mobility & transport, just to  mention the policy fields most directly linked to territory.  Territorial development at the European level is quite simply a fact of  policy life, recognised in the treaty as ‘territorial cohesion’.

However, as it is (almost) everywhere but nowhere within the European  Commission, territorial cohesion has until now never really found a  ‘home’, just ‘temporary lodgings’ in the most territorial of the  sectoral Directorates-General (DG), i.e. that for regional and urban  development. This is one of the reasons why the territorial dimension of  European policy, despite its underlying presence, has never really  achieved the recognition it deserves.

Recently an updated ‘Territorial Agenda’ for Europe towards 2030 has been published in which the need for good  governance has been underlined. Moreover, the European Commission has  recently launched a general dialogue to collect ideas from a broad range  of citizens on the Future of Europe. In the light of these two new  initiatives, now is a good moment both to find an effective ‘home’ for  territorial development in the European administration and, more  fundamentally, to push forward new policy specificities for territorial  cohesion as an important part of the reappraisal of the EU that will  hopefully emerge from the ‘Future of Europe’ discussions.

Both of these initiatives bring to light a rather underexposed but  nevertheless increasingly important element of EU policy laid down in  the Lisbon Treaty – the „shared competence“. Territorial  Cohesion by its very nature is an outstanding example of a shared  competence, as territory is relevant at all levels of governance and its  sustainable, responsible and equitable  development at the European  level is only possible if all levels of governance are to some extent  coordinated. What better than to use territorial cohesion to give  practical form to this important opening in the Treaty. But first of all  a better place has to be found for territorial cohesion within the  European Commission.

The European Commission itself has recently undergone quite a  considerable reshuffle. It now consists of six Commissioners’ Groups,  reflecting the six ‘horizontal’, or cross-sectoral, priority policy goals of the Commission in a more matrix-like organisation, attempting to  help ensure a better collaboration between the sectoral  Directorates-General (and Executive Agencies and Service Departments) in  the pursuit of those priority policy goals. Most Commissioners now have  a title of responsibilities reflecting more the ‘horizontality’ than  the ‘sectoral’. It is also somewhat more hierarchical, with the  President at the top (with an overall coordinating role), three  Executive Vice-Presidents (VPs) and five VPs with special thematic coordination roles at the second level, and then  the ‘normal’ Commissioners at the third level who are responsible for a  DG as well as being members of one or more thematic Commissioners’  Groups.

The Commissioner responsible for territorial development’s ‘temporary  lodgings’ – ‘Cohesion and Reforms’ – (now Elisa Ferreira) is indeed a  member of the Commissioners’ Groups responsible for the ‘European Green  Deal’ and ‘An economy that works for people’ but her actual responsibilities are, as a ‘normal’ Commissioner, limited to her assigned portfolios.  However, it must be said that these include many operational activities  that make crucial contributions to EU territorial cohesion, for which  she clearly has an important role to play. But the overarching aim to  achieve more cohesion for the EU territory as a strategic,  cross-cutting, coordinating activity is far too fundamental a policy aim  for the EU for this level of responsibility. It needs to be  (explicitly) assigned to a thematic cross-sectoral Commissioners’ Group  and coordinated by, and under the responsibility of, a Commissioner at  the second level.

Firstly, if Cohesion is to get a more central status in the policy  aims of the EU, then in the initial stages of this process, attachment  to its original roots – i.e. jobs and growth in disadvantaged regions –  should be clearly evident. Broadening and increasing the central  importance of cohesion in EU policy should not go too fast too soon. It  has to gradually grow in status.

Secondly, in the mission letter to Valdis Dombrovskis for the present Commission period, President Ursula von der Leyen writes: "You  will support me in the implementation of the Recovery and Resilience  Facility and refocusing the European Semester, supporting Member States’  investments and structural reforms aimed at speeding up economic  recovery, territorial cohesion and inclusive and sustainable growth and integrating the United Nations Sustainable Development Goals.“ In this respect, Valdis Dombrovskis has already been assigned a special  responsibility for territorial cohesion, but without a clear mention in  his portfolio nor in the Commissioners’ Group priorities. Nonetheless,  what we advocate is that Valdis Dombrovskis takes this part of his  mission seriously and gives territorial cohesion a central place in his  coordinating function of the Commissioners’ Group on ‘An economy that  works for people’.

In conclusion, it is important that there is a distinct movement  towards improving the governance of territorial cohesion within the  Commission. Improving territorial cohesion, in the broadest sense of the  word, appears to be one of the most crucial cross-sectoral aims for the  future of the EU. It is not overstated to say that the future success  or failure of European integration largely depends on this question.

With the introduction of Commissioners’ Groups as an intermediate  level of cross-sectoral thematic coordination, Ursula von der Leyen has  given a promising impulse for a better delivery of the political  priorities of the Commission by focusing on cross-cutting issues and  shaping coherent policies.

At the end of this Commission’s term, in 2024, we will know how much  this organisational innovation has worked in practice and how successful  it has been. We will also know to what extent it has improved the  delivery of coherent territorial cohesion as a foremost field of  cross-cutting policy and shared competence. Success is vitally  important, because, after 2024, territorial cohesion should be firmly  and explicitly lodged in one of the priority policy Commissioners’  Groups in the next Commission, ideally assigned to an Executive  Vice-President responsible for Cohesion.