At last, a long-term territorial vision from the European Commission, but only for parts of the EU territory 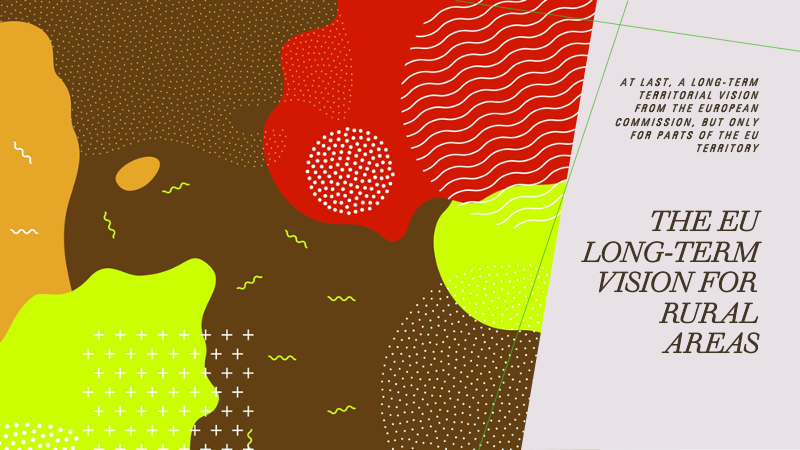 This summer, the European Commission initiated an EU Long-term Vision  for Rural Areas. The process is borne by a cooperation between DG Regio  and DG Agri and involves dialogue between the related institutions and  political players [see]. It is also an invitation to think about a common European vision for 2040.

This is really a positive new development in European policy making  and could lead to a new and beneficial avenue in conceiving European  politics, policies and actions. Finally, there is a sign of willingness  and a recognised need to consider the long-term and produce visions.

However, to be useful and have impact, visions need to provide clear  and operational views and aims for future aspired situations that policy  actions can work for and implement. This is a key point for success and  should be guiding the process ahead of formulating a Rural Pact. The  envisaged Rural Proofing – that could take experiences from Territorial  Impact Assessment (TIA) into account - will only become feasible and  efficient if the pact expresses clear political aims and goals that  policy makers can use when formulating and assessing policy initiatives.

Concerning rural areas or territories in general, the further process  and putting the long-term vision into practice must reflect the  widespread diversity of rural areas in Europe. There is a huge  difference in the opportunities and problems of remote and less  developed rural areas compared to rural areas with many smaller towns,  and rural areas closer to or integrated in larger urban  agglomerations. This territorial diversity needs to be captured and  reflected in the vision for it to become useful. The diversity needs to  be integrated in, and even structuring, the Rural Action Plan, that  should set out actions for all types of rural areas and not focus only  on remote and less developed ones. Here, the envisaged Rural Observatory  could map the rural diversity and produce the supporting information  and knowledge. Drawing on its rich experience, ESPON could be a vital  and supporting partner in this work.

The different elements and the process envisaged in the elaboration  of the long-term vision for rural areas would seem all positive and  relevant. This way of arranging work towards a long-term vision could,  with benefit, be copied in other similar processes. However,  unfortunately, the interdependency of rural areas and their relationship  with other types of areas on the European territory is currently  absent. This is a major deficit. As example, one cannot isolate rural  areas from their nearest urban areas, as functional urban-rural links  are crucial to solid rural development. For the credibility and  place-based character of the vision this broader and more integrated  perception of relations and dynamics of territories should be ensured.

For sure, the long-term Vision for Rural Areas is a much welcome step  forward and extremely useful for certain types of rural areas, probably  in particular remote and less-developed ones. However, looking towards  2040, it would be of far greater value for the EU to see rural areas as  an integral part of a more comprehensive long-term vision for the entire  EU territory.

Such a comprehensive, long-term vision for the entire EU territory  could address all the different types of places and territories, and the  future overall structures, interdependencies, and interrelationships to  pursue. An overall EU vision could embrace the diversity of places and  areas and set out operational long-term aspirations that could serve as a  reference for other policy decisions.

In a vision process on the entire EU territory, there are important components that should be included:

Comprehensive and integrated long-term EU policy aspirations and  overall aims for the EU territory, for the diversity of places and  territories within the EU, formulated together with the relevant policy  sectors, would be a welcome innovation in EU policy making. Moreover,  with a broad democratic involvement, it would make the EU more visible  and accepted among citizens.

The European Commission should, as said, be congratulated for moving  into long-term visionary considerations that are carried forward and  coordinated by several Commission services. Lessons should be learned  from the first attempt on Long-term Visions for Rural Areas and used to  create a comprehensive long-term reference framework for the EU  territory that could inspire future long-term policy making at EU level.

To meet future challenges, it is crucial to stimulate greater  coordinated efficiency in EU policy making and funds, and to provide an  important and targeted action base for implementing more territorial  cohesion and cooperation around the EU.

The Commission is strongly recommended and urged to take further  steps and enlarge the use of long-term visions related to places and  territories as a reference for policy making. The forthcoming Cohesion  Report would be an obvious place to outline such intentions.