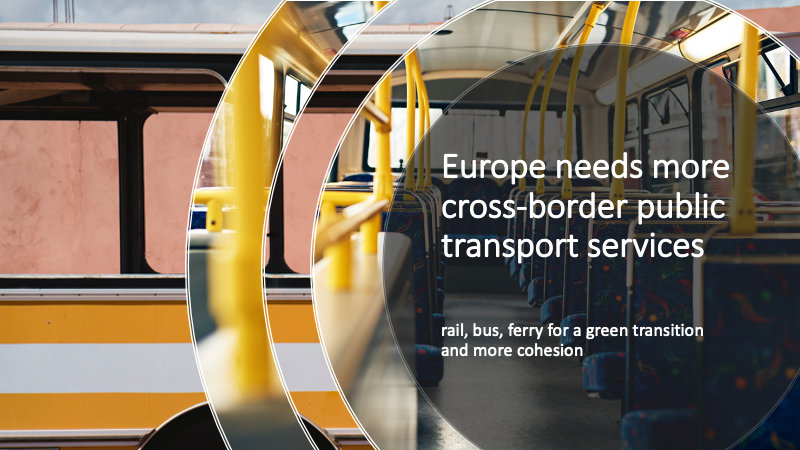 The green and just transition of Europe needs a greater shift to soft mobility and public transport. This is not equally easy in all places. When public transport services need to operate across national borders, there is another layer of complexity.

Given that about 1/3 of the population in the EU lives in regions bordering other EU member states, cross-border public transport is an important element of our transition to a green and just future.

A recent study provides a good overview on the state of play of cross-border public transport services in the EU and neighbouring countries. In rough terms, following services are available:

Challenges in beefing-up the services

Overall, cross-border public transport services stand only for a tiny share of all cross-border transport flows in Europe’s border regions. For instance, in the Belgian-French Eurometropolis Lille-Kortrijk-Tournai, only about 5% of the pre-COVID 500,00 daily cross-border movements take place via public transport. In the Italian-Slovenian twin city Gorizia-Nova Gorica it is only 1%, and the French-German tram connection between Saarbrücken und Sarreguemines stands for less than 0.5%.

Still, experience shows that most of obstacles can be overcome. This however requires willingness to find solutions, stubbornness to fight longwinded and complex processes and especially governance structures and capacities to drive the necessary processes and not give in. Different access points to solutions are offered in a toolbox.