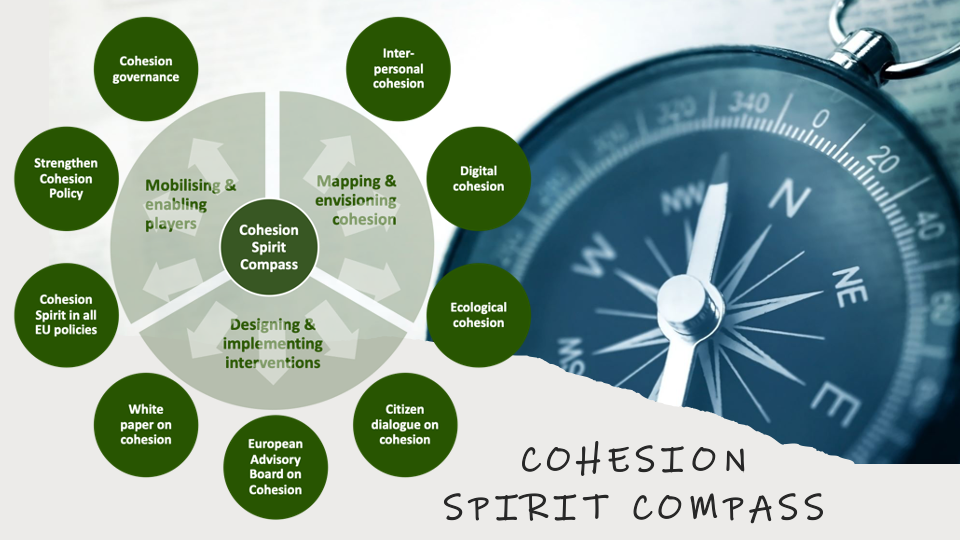 Increasing inequalities between places and societal groups challenge the future of Europe. To avoid fragmentation putting an end to European integration, we need to rethink cohesion and act on it. What does the aim of economic, social and territorial cohesion laid down in the Treaty on the European Union (Article 3, TEU) mean in the light of today’s societal challenges?

A new take on cohesion is needed

In a recent study for the European Committee of the Regions, we have operationalised this general aim, and identified cohesion principles and dimensions. These help to better understand the ‘Cohesion Spirit’ of European policy making. A review of 15 rather varied EU policies showed that the ‘Cohesion Spirit’ is mostly present in the aims of the policies. However, it fades away when moving to the policies’ specific priorities and implementation.

Putting it bluntly, the aim of cohesion is largely left to Cohesion Policy. At the same it is clear, that cohesion is a very abroad aim which cannot be delivered by a single policy – however large it is. Indeed, given the size of the cohesion challenge, there is no single EU policy which can do so. If cohesion is wanted in Europe, we need to mean it. We need more than Cohesion Policy & lipservice by other EU policies.

Furthermore, limiting the cohesion debate to economic, social and territorial cohesion is no longer timely. In the light of today’s grand societal challenges, we need to broaden the understanding of cohesion. It needs to also address interpersonal, digital and ecological cohesion. Basically, cohesion needs to be made more tangible to the people in Europe. Bringing Europe closer to the citizens must also mean to involve them in defining and delivering cohesion. This needs to correspond to their varied and subjective understand of cohesion – often linked to their personal well-being and future prospects. This means, Europe must engage in a public debate about the meaning of cohesion. This debate needs to feed into policy making and preferably a European white paper on cohesion outlining how Europe understands cohesion in the light of today’s challenges and how to deliver on this.

Doing so would have the potential of clear cut economic benefits as shown in a recent discussion paper by JRC. Modelling two scenarios, the papers shows that a cohesion aim of all policies would help to increase cohesion in Europe substantially. For instance, increasing investments in education and training in regions lagging behind in the EU Innovation Scoreboard could reduce economic disparities in Europe. 1 EUR of investment returns 1.79 EUR in GDP in the low innovation regions, compared to 1.29 for the mean EU member state.

In other words, strengthening the ‘Cohesion Spirit’ in EU policies would pay off even economically. While at the same time, counting to ignore cohesion as an underlying aim and value of the EU will further increase inequalities and fragmentation – between places and between people in Europe. Without cohesion the backing of the European idea risks to decline.

Cohesion must shift from a ‘flanking policy’ to a policy objective in its own right, in line with Article 3 TEU. Cohesion as a policy objective has to be adjusted to today’s societal challenges. The understanding of cohesion ha to go beyond the economic, social and territorial cohesion. As EU policy making increasingly understands the necessity to reach out to citizens, an interpersonal cohesion dimension could be in place. Increasing digitalisation could be acknowledged by updating our understanding to incorporate digital cohesion. Given the challenges of climate change and loss of biodiversity, ecological cohesion must be considered.

Moving EU policy making to embrace cohesion will require many different steps. The most important we have collected in the ‘Cohesion Spirit Compass’. It contains nine concrete proposals on how to better define cohesion, how to deploying impactful interventions and how to empower relevant players. We need to envisage what cohesion means today, thinking beyond economic, social and territorial cohesion. Showing what a new ‘Cohesion Spirit’ could look like, when putting citizens and the transition to a digital and green future first, might help to make the idea of cohesion more tangible.

We need to identify and deploy impactful interventions to achieve cohesion. This needs to be done in a collaborative spirit with the citizens and relevant policy makers across all sectors and governance levels.

Empowering stakeholders to implement cohesion, will need a strong Cohesion Policy, a clear ‘Cohesion Spirit’ in all EU policies and multi-level governance arrangements involving local and regional authorities as well as civil society.

Taken together, these nine points of the ‘Cohesion Spirit Compass’ will allow for a shared vision (or narrative) on cohesion and the future of Europe to be embedded in relevant policies and decision-making processes from local to European level.

The full study is available with all the details on the understanding of cohesion and the proposal of a ‘Cohesion Spirit Compass’ is available at here.