I write from exile on Twitter. 4 hours ago Twitter blocked my account. Wordlessly. And thus deprives me of contact with my readers. Obviously, this is done quite deliberately. In the same breath, such behaviour is of course also damaging to my business. But that's what it's all about: destroying small online media so that critical voices disappear.

Even with a clear opinion you can be a relaxed contemporary. That's how I see myself and I think most of my followers see it similarly. There are no hate reports, no arguments and insults, and certainly not. My Twitter account has had less than a handful of messages over the years. The few came from the "Ende Gelände" discussion. But Twitter didn't object to my tweets either. I would have wondered something else, as I am particularly careful to remain objective in discussions. And anyone who follows me knows that too.

This afternoon, I found my account blocked after posting several completely harmless tweets. One of them showed me with a glass of Belgian beer raspberry flavour. But maybe someone didn't feel comfortable when I recommended the Arte film "Big Pharma" or wished Pro7 more backbone. Despite all the criticism, I don't insult or throw swearwords at them.

My account is the mouthpiece between the magazine and my readers. Sometimes it's about flowers and bees, and sometimes about corona and vaccinations. At the same time, Twitter is also my view of the world. I follow many accounts from Germany, Switzerland, Austria, Italy, Great Britain. News that interest me but also topics that are important for my work. Castles and gardens, museums, travel destinations. Just name it. The connection to other people is interesting, fascinating, exciting. Twitter allows a view into the world, 24/7.

Without complaints, without reports, without warnings - nothing. Not even a message to block. I must really be a really bad finger. Now you might think that this is not the end of the world. No, it is by far not. But: It is a deliberately intended break in my work as editor of an online magazine. Because with every article I reach people. With the completely surprising action of blocking my account, I claim that this separation was obviously deliberately brought about. According to the motto: articles - but no readers. 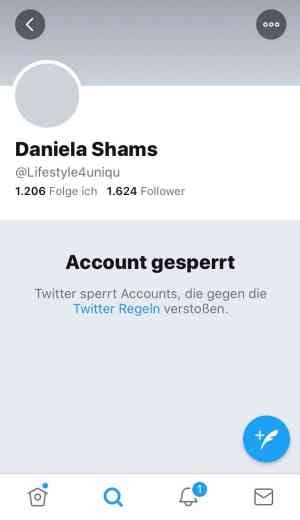 Where political shareholders want to avoid hatred, they use general terms in the same breath and always have the perfect explanation at hand. In truth, it is hidden censorship. And don't come to me with conspiracy theories now!

I had my first experience on Facebook with the article "Gone with the Wind". Facebook staff did not approve this article as advertising because it would "politically influence the elections in the USA". Seriously? They have a lot of faith in me! Basically, I should feel flattered. Well, I would indeed be delighted if the reach of my readers in German! would extend as far as America! The calculation behind this is clear. And this kind of control only exists in Germany. Absurd.

A magazine has different sources of income. A few of them fall away with the lock. Not only direct income. Last but not least, it is primarily about reaching readers directly who are interested in the individual articles.

And I'm sure that those who use the Twitter lock lever know exactly that. Possible sources of income as a means to an end. Applying pressure (in this case with the lock) to tactically stop criticism. In times when earning is particularly hard anyway, perfidious and disgusting.

Why does this hurt me so much?

I started more than 5 years ago to learn autodidactically how a magazine is structured and created. The texts were just the beginning, then came Wordpress, plugins, design, photo editing - not least Seo-optimisation. Google Analytics, Google Search Console, Pagespeed, hoster selection, e-mail addresses - just name it, I learned and built everything on my own. I shed tears, fell into bed after 16 hours, took the work with me into my dreams, bought tools, paid bills even if it is sometimes difficult ...

An article like "On press freedom day: Vaccination against Corona?" takes a week - just for writing. Part of the research I collected in months of work. Conversations were held, enquiries were made, further research was done. No client pays for such articles - only the readers. Because only then can they be written independently. A client would cut and delete, would not want certain information in the text. From my work as a health adviser I know what information people are looking for. And I support all those who feel the need to deal with various topics.

... And then someone comes and turns off the switch. Twitter, I'm not finished yet.

It's like closing the streets of a shop within a radius of 5 km.

Numerous visitors come via Twitter. For no reason something is being destroyed that has been painstakingly worked on. Now it is me who is asking for support. Support the magazine Lifestyle4unique! If only to keep in touch. Steady offers a good platform here that works independently of social media. Because no magazine should be without readers, and no reader should be without a magazine. The importance of freedom of opinion and attitude journalism is evident again today. Media should only be paid by their readers.

Lifestyle4unique is an independent magazine, and that is how it should stay. That is exactly why I need your support.

I send a heartfelt thank you to the world.

0 high-fives0
0 0 Comments
Comments are available for members only. Join the conversation …
Be a supporter!